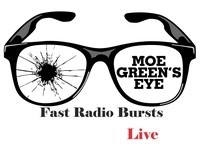 Based in New York City, the band Moe Green’s Eye is out with a new live EP called “Fast Radio Bursts”. The first thing you probably notice is that the band has a very distinctive name. It’s a reference to the character Moe Greene in The Godfather. It specifically relates to the character’s gruesome, but iconic, end. It’s even got it’s own slang. If you hear something about a “Moe Greene special,” shield your eyes and run for cover.

This EP is live, but it’s very clean and the sound quality is great. My initial concerns and annoyance at most live albums faded almost immediately. The lead singer isn’t all that special, but his vocals are nice enough and match with the music seamlessly. I’m a big fan of the drums, they carry the most heart in this band, from what I can tell. They’re present and clear in each song, and I found myself focusing on them the most. The guitarist is very talented, as well.

“Fixed” starts off with a great sound, but then it doesn’t progress much. The song is over five minutes, but the lack of nuance in the melody leaves me wanting it to just end already. Other songs aren’t quite as long, but the lack of variation left me wondering if I’d just been listening to one long tune, instead of four different ones. The lyrics in “Fixed” are especially solid, so pay attention to them.

“Stay” is a little more upbeat and you can find yourself swaying to the melody. I especially love the guitar in this song. It’s pretty straightforward, about changing and a questionable relationship- whether or not you want the subject to stay with the singer is up to you.

“It’s Over Now” has my favorite opening, and the riff is present throughout most of the song, which is it’s best quality. The song gives you the image of a long-lasting battle against something, only to finally get the hell out of that. It wasn’t pretty, but you’re still here. Somehow. You can imagine the exhaustion, the cautious optimism- it’s over, you’re free. If that’s not something worth celebrating, I don’t know what is.

“What About Time” is where the guitarist really got to show his skill. While the rest of the song doesn’t really stick out to me, the guitar sticks with me. If I’m being honest, I don’t much like the lyrics or the general melody, outside of some really great riffs here and there. With all that said, I don’t think I’d mind hearing it somewhere at all. It’s just not all that special.

In the end, Moe Green’s Eye gave us a solid, if a bit too safe, EP and it’s worth a listen or two. It’s definitely one you can listen to when trying to relax and wander around in your own little world. It’s not distracting, but it is mellow enough that I couldn’t suggest adding it to a focus playlist. Listeners who enjoy soft rock with very obvious influences by REM, I would suggest it!