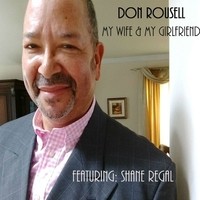 Don Rousell is truly an artist. He’s primarily an electric bass player and if you ask…he’ll tell you that “I dabble on the piano a little”. Which is where he writes, arranges and composes most of his music. Don’s interest is all over the place. This is what makes him an artist and definitely an independent. His musical interest includes Contemporary Christian Music, Gospel, Rhythm & Blues, Jazz, Funk, Rock and Classical Music. Frankly, if he likes it…he may very well write it and record it. Here I’m taking a listen to his latest single release entitled “My Wife and Girlfriend (Feat. Shane Regel)

The songwriting here aims to promote a more “truth be told” message than what we hear on the radio these days. The overall vibe I get is this guy and his band are holding nothing back, thus steering clear of reducing songs to sanitized versions of themselves. The first few seconds of this track hit the deck running as it bursts to life via well-appointed movements, soulful-rock vibe and a strong vocal presence up front. Also present are tight harmonies and consistent groove-ridden rhythm section and some killer guitar work. In my opinion this project features 3 main ingredients: Don Rousell on vocals/bass and as primary composer, the rhythm section and guitar by Regel. To me these 3 personify the core of the Rousell sound on this piece. This may sound stupid – but it’s amazing to me how valuable Rousell is to this kind of sound. Rousell is the key ingredient that makes all of this work oh so well in unison. All 3 finely balanced within the mix. The vocal range of Rousell especially appealing to the higher registry is artfully defined while still layered quite nicely within the pocket. He has much to offer insofar as passion, grit and power without falling into the vocalist-with-supporting-arrangement trap. This song is not only catchy, it stimulates the senses one can’t help but admire how all the instruments and musical styles showcased here are distributed masterfully within this track. This is a true to form old school blues-rock-song that successfully captures the vintage songwriting virtuoso of Rousell. I can hear elements of Steely Dan, Bill Withers and Otis Redding as well. Throughout all piece one will notice a tragic-sweetness and blooming hooks all the while maintaining an intimate “conservative” bluesy-groovy feel.

“My Wife and Girlfriend” is undeniably blues/soul based with an almost Americana feel to it courtesy of this artist and demographic. Many parts of this song are more than ripe for all the old blues school rockers mainly due to the “truth be told” lyrical content. On “My Wife and Girlfriend” expect no overdubbing or disappointingly amateurish mixing with a disingenuous attempt in making a hit record. This is a high-quality, clean recording that balances out both natural and midi sounds flawlessly. The music though effective may not be as marketable as some of the more-hookier sonic-dance styles of music I’ve heard recently. I also wish I heard a red hot solo guitar segment in there. Regardless Don Rousell is a real deal talent and as a whole, as a result it’s an impressive single. This music may not be for the sonic pop crowd but regardless of any of that it proves that with continued dedication via a powerful song great music can be achieved regardless of how modern it may or may not sound.