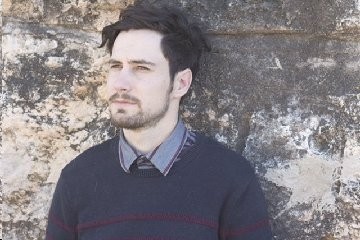 The cover of the album is a golden yellow and black. The yellow color is a blooming flower shape similar to something that you would see in a kaleidoscope. On the website where the playlist is accessible there is a small picture of who I assume is the lead singer. The small picture is small and pleasant. In it he’s wearing a blue sweater and looking to the left. His hair style and even the background behind him match the soft pleasantness of the soundtrack. The first song on the album is titled Germ Theory. It starts with an introduction from a piano, and in the background there is the cracking of a record. He soon begins singing. He has a pleasant and light voice that works well with a piano accompaniment. There are some repeating words in the song. “I I I I I I,”is the repeating phrase, it’s simple and works well with the phrases after the words. The piece ends with the same crackling a record makes. It ends with the same sounds that it began with. This is a great way to make the song come full circle.

Next in the playlist is a song titled, Blue Eyes. It’s a love song that uses all sorts of word play and clever phrasing. One such line of word play is, “And at the same time tell our tale so bold”. Using the words tell and tale is a clever use of phrasing. The words are so alike, it makes the listeners think about the words and the meaning longer than they usually would. Every line of the lyrics has this unique way of saying things. It is a real treat for listeners. The Great Exchange is the next song on the list. This piece begins with a mix of instrumentals that cannot be exactly distinguished. The song then progresses from instrumentals to the addition of his vocals. Word play is also very present in this song. Describing guilt as the color silver is a very visual and an effective way of illuminating that emotion. Word play and the melody draw you into the repeating lines of, “this is the great exchange.” This catchy phrase brings you to the second line of lyrics, which conclude in a consistent manner.

Welsh Avenue has very short lines of lyrics. However, the singer really adds emphasis to the words by singing them slow and even. The small amount of lines is very effective for this music. Time to Fly is the final song in the playlist. This song also uses his slow emphasis of the lyrics to bring more attention to what is being said. He once again demonstrates how great he is with word play in this song. He is creating a great range of images with his words. The ending of the song soon arrives and it trails off using the word fly. This really brings home the message of it being time to take off, to fly away. It’s time to fly.