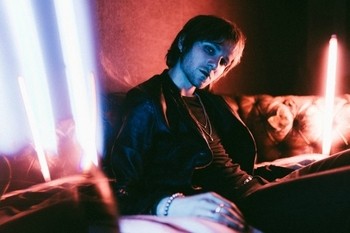 ‘Beam Me Up’ is the follow-up to their triumphant return single ‘Ballad of Black & White’, which The Line of Best Fit described as “a summer anthem in the making. Rock and roll at its most addictive and sprawling, the track radiates with a nostalgia for sun-soaked fields and pints in paper cups. With this new single, Darlia are showing the full extent of their ambitions.”

Speaking further about the track, Nathan explains “The song basically happened by itself. I sat down with a keyboard and it was finished within 10 minutes. Normally I write on either acoustic guitar or keys then record it 10 times faster with an electric guitar. But this is the first time we’ve released a song in its original ‘raw’ form.”

Having recently sold out their headline show at London’s Camden Assembly in just a day and supported Twin Atlantic on their May UK tour, Darlia will be touring the UK in Autumn 2017. Dates include Birmingham, Bristol, London (Scala), Leeds and Newcastle. Tickets on sale now from Darlia.co.uk. They will also play a number of festivals including: Community Festival (w/ Catfish and the Bottlemen) and Tenement Trail.