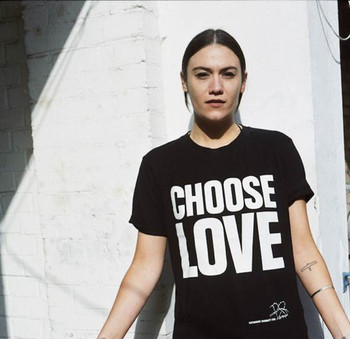 English musician Nadine Shah has recently announced the release of Holiday Destination, her brilliant and compelling third album due out August 25th on 1965 Records as well as sharing the potent first cut “Out The Way”. Today she has shared new track “Yes Men”, a fearless commentary on power and manipulation. Listen to it HERE.

“Any time is a relevant one to release a piece of work that deals with the subject matter that ‘Yes Men’ does, but this week, these upcoming days towards what could be the most important election this country has had in decades it seems so pertinent to the point that it’s violently vibrating with its own life.

Yes Men are the people that sell the lies and convince us that their enemy is our enemy, they’re the people who hide in plain sight behind bold typefaces on the covers of mainstream media outlets, the ones that would make us believe that the hand in power which is perpetually slapping you in the face is the hand that will someday pull us from a chasm of its own creation.

There is a war going on but it’s not the one the Yes Men will have us believe. The real war is the divisive untruths that the Yes Men push into our homes with their aim being for us to tear ourselves apart simply to protect their own top dollar arses.”