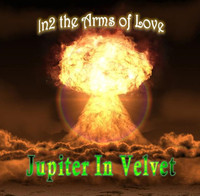 Jupiter in Velvet has been a prolific creative artist since his 2012 debut and his sixth release In2 the Arms of Live further solidifies his standing as one of the more abiding rock artists to emerge in recent years. His deft blend of retro rock posturing, cut with a distinctly modern aspect, shows no signs of stagnation. Instead, his songwriting continues to crackle with the same stylish inventiveness characterizing his previous releases and the same imprimatur of inspiration fueling his earlier work makes this latest album quite impressive. His songwriting and musical skills are equally strong, but the final ingredient pushing it over the top is the rambunctious presentation he offers audiences. It’s a proven winner. In2 the Arms of Love features ten songs and not a single track can rightly be considered filler. Jupiter in Velvet’s talents are set to full on stun and he wins you over from the first.

He certainly shows more than a little confidence opening things with the title song. It’s one of the album’s best tracks. Jupiter in Velvet has an entertaining tendency to record and produce his material in such a way that it has an across the board raw and intimate sound. Bringing it together with his emotive and marvelously theatrical voice creates some gripping dynamics on even the weaker tracks. He lays everything down as a sort of all-encompassing statement – his layered approach to songwriting clearly looks to create worlds for listeners to briefly inhabit and has remarkable accessibility. There’s even more attitude sparking off the terse guitar lines of “’Till the End of the World”. Machine gunned percussion blasts spike the tempo at intermittent points and gives the song some added tension, a suggestion that it’s struggling to contain itself. He strips away some of the sophistication from his approach on the straight forward pop rock of “I’m So Ready” and the results are sure to immediately connect with many. Jupiter in Velvet’s vocals and guitar alike ride its construction with unabashed glee and match up good with the abbreviated riffing.

“Supercharged” begins quite evocatively with some well spaced guitar chords, a synthesizer charged sheen hanging over the song, and Jupiter in Velvet’s yearning voice. It soon shifts into a manic, uptempo churn while still retaining many of the qualities suggested by the introduction. The chorus is particularly notable. The tightly wound tempo of “Carry On” keeps a hard-charging pulse going while the guitar mimics it with tight and shimmering staccato strumming. “Mars Ain’t That Far” has an unexpected post-punk bite mixed with Jupiter in Velvet’s typically idiosyncratic lyrical flourishes. There’s some romping keyboard lines thrown into the song for good measure and they are a seamless fit with the performance. The album closes with the track “Walking Thru Time”. It’s another song somewhat reminiscent of post punk guitar rock, but there’s a little more complexity here than what you might usually find in that style. He stretches out more here instrumentally than on earlier songs – an extended introduction, longer than usual running time – and clearly wants this to serve as an exclamation point for everything preceding it. Jupiter in Velvet’s In2 the Arms of Love packs a powerful punch and doesn’t pull its strength any. It’s another substantive musical statement from an artist committed to following his Muse wherever it may lead.