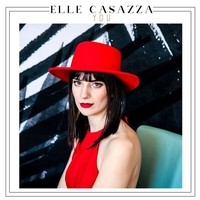 The second single from Elle Casazza’s latest album Proof, a rich ballad entitled “You”, further illustrates how this young talent is an immediate force to be reckoned with on the modern pop scene. The Chicago native has built on the promise of her 2013 debut by further broadening her sound and creating space for more influences under her artistic tent. The pop, soul, R&B, funk, and jazz are united by a singer/songwriter sensibility that mines the details of her personal life for musical gold. Casazza isn’t, by any means, a diarist. Her songwriting is clearly personal, but the songs are framed in such a way that they have universal emotional impact. “You” is one of the album’s best tracks and definite proof that Casazza is far from one of those sensitive performers content to wallow in their misery. Instead, this is hopeful and joyful song set to a superb musical backing.

Some listeners might draw comparisons to performers like Regina Spektor and they aren’t entirely wrong. There are substantial differences, however, in their vocal approach. Casazza has a much stronger, less coy approach to her singing and sacrifices playfulness on this song in favor of making an immediate emotional connection. The majority of the tune devotes itself to a stripped down approach – Casazza’s voice working in close concert with raw, physical sounding piano. Some listeners might argue that there is a slightly uplifting tinge in the way the piano lines are structured – the start-stop arrangement is mimicked by the vocal melody as well. The doubling gives the song an inviting familiarity that it might have otherwise lacked.

The lyrics are intelligent in a form and genre that doesn’t demand it. Casazza doesn’t merely meet a seldom matched benchmark, however, and distinguishes this song by balancing the personal and universal in an extremely artful way. The emotiveness she brings to the songwriting elevates her writing several notches, but the words are obviously well tailored for the arrangement. The song’s length feeds into all of these qualities. The length of the initially muted first, the introduction of additional instrumentation late in the song, and vocal touches all come together with just the right amount of space allotted to each. It makes for a fully realized effort and the fact she can tackle such unusual subject matter for a pop song bodes well for her future work. Elle Casazza’s single “You” reveals her to be an unique performer and artist on every front and promises even more for the future. Songs like this are increasingly scarce in 2017 and it behooves any serious music fan that they expose themselves to this level of excellence with all possible regularity.