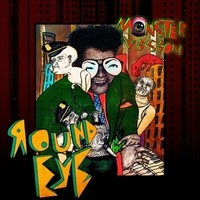 Round Eye are experimental, do feature a sax, and are no question a punk rock outfit. And yes, they are controversial and explicit, so, if that is not your thing there won’t be much to look-into. But if it is, there is plenty for the thrash lovers to slam around to on Monstervision, their new May 2017 release. This group are from Shanghai, were formed in 2006 and have toured with punk legends The Boys, from the UK. The album was narrated by former The Daily Show comedian John Bloom who plays Joe Bob Briggs, and is the last recordings laid to wax of the late great Steve Mackay. I like The Boys a lot, so, knowing that is a plus to review this monster piece of sorts.

With comedian John Bloom cutting right in as character Joe Bob Briggs, on the intro, which runs just like a radio ad with the host setting up the first track. This is a brilliant way to do things in accordance to Monstervision, as it produces a visual like being in station. The slapstick doesn’t hide and it’s off with a gong before a fast romping beat “Commie Blues” to get the monsters flying. It doesn’t matter what it’s about, even though the title is suggestive. There are some pretty-cool sonic bits to counter it. And Joe Bob introduces the next track by going through some of the characters, Billy, Sifta and Troma.

This turns out to be three tracks before he comes back into the picture. And they follow a Ministry style punk assault, with an industrial sound. The guitars are menacing as they get into the mix, but it’s mostly vocals getting the message across, especially on “Torma.” This also has a pulverizing bass line and some killer melodies that clearly sport their songwriting prowess for the punks they are. And then some more talk from Joe Bob’s eight appearances on the CD. This one is a quickie before “Hey Dudes” kicks in with the sax getting some treatment, adding a welcomed Ska element for those who’ve never heard Round Eye. And, so far this more commercial piece is the best track on offer.

Joe Bob Briggs can only ask one question after that. And the next track “Pink House” bubbles right along with an even more interesting narrative style vocal with some swing style to musically rock things up. This is another highlight of the set, harking back to the B-52s and other new wave bands of the 70s. It’s all in there, a party song of the Oingo Boingo order. This is undeniably awesome, with the sax holding it all down till the last breath as it fades away with a clumsy but witty outro. This isn’t your ordinary punk by now, as this verges on epic with a strong jazz inclination.

This give Joe Bob an opportunity for a joke, and it’s into a couple more sax heavy songs, both containing the Monstervision mojo. With vocals that remind of everything from Wholly Bully to Johnny Rotten. The guitars going surf and the whole thing just reminding that “reality TV never looked so good.” If the track “Richie” pushes one thing it is exactly that. And of-course that had Joe Bob coming in at just the right time to explain that this whole album doesn’t make sense. But as the rest goes it won me over the first time I heard it, with no need for any sense other than what it musically makes with examples like the following “Curami” and the rest. It’s all lighthearted and comical, with some seriously good musicianship displayed for its primary genre.