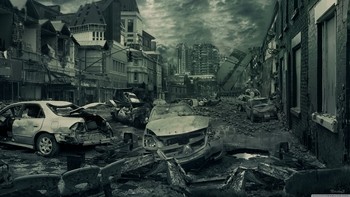 While not the most classical post-apocalyptic sub-genre, the zombie themed end-of-the-world scenario is certainly the most popular in recent times. Luckily, there are many books that satiate this desire and websites which can provide a post-apocalyptic book list of which to choose.

Written by D.J. Molles, we see the story of a soldier who is awaiting orders while holding his ground in an underground bunker under his house. Meanwhile, the surface world is faced with a rapid-spreading infection that transforms the population into aggressive zombies.

A work by Richard Matheson, it sees the world consumed by the effects of vampire virus that has left the world empty, save for a Robert Neville that must survive. As far as he knows, he is the only human left and must face the undead by himself. However, events unfold that might change his state of being the only human left.

Made by Guillermo Del Toro and Chuck Hogan, in the world of The Strain vampires have always existed amongst us. They lived well hidden from humans and have been making their own plans in regards to us.

The story begins with a Boeing 777 landing at John F. Kennedy International Airport and just suddenly goes completely dark. No communication is sent out, no lights are visible inside, and all the windows have their shades pulled. Airport personnel could not provide any answers as to what is happening, but information regarding this is sent out to the Center for Disease Control. In comes Dr. Eph Goodweather and his special response team, who begin assessing the situation and boarding the airplane. What he finds inside is beyond anything he has seen.

In the meantime, we read the perspective of a pawnshop owner Abraham Setrakian who knows all too well what is happening with the airplane and seeks to alert the authorities. However, much to his dismay, he faces skepticism and ridicule which will cost humanity dearly.

Is a story of an archeological discovery uncovered by Pippa Quinn and Charlie Jackson. These archeologists have found technology in 16th century graves that surpass anything we currently have. They found a warning that precedes the activation of thousands of massive sinkholes that will threaten the world. To make matters worse, a previously dormant and ancient enemy will rise to face humanity and threaten its existence.

A survival story written by Craig Dilouie, we see the adventures of a small group of normal people that must endure the horrors of having to survive the end of days. What is worse is that those who die do not remain as such, they rise back to motion with the sole intent to spread their unlife to others.