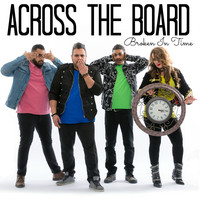 Canadian’s Across The Board or ATB for short is an indie alternative pop rock band, trying saying that 5 times fast. Who like many artists and bands is just trying to push themselves to the limit if not the edge of the pop or rock music scene. They bring with them a track of a song called “Broken In Time”, which mixes the genres they portray of course. Does it hold up and go with what the band claims, why of course it does, if you can believe that, that is. “Broken In Time”, is built of indie pop rock, with that alternative flare thrown in for good measure, as the song’s sound is filled with tons of vibrations with some good old times.

Good old times as in a dose of the past if you will. Having it become one of those songs that you will likely hear again many years from now perhaps. It’s one of those tracks you could bob your head or tap your feet too. It has melody, upbeat tones, catchiness flowing through it. It’s a track you could even hear possibly played in a club or at a party of some sort. That’s the precise energy that this song has going for it.

The band themselves though are more laid back, easy going, have got nothing to worry about type of feel from their looks, style, and sound given off from this track alone. Again the song is rather upbeat and catchy, it has just the right amount of energy that you can enjoy it at all costs if at that. Or perhaps even at any time of day whether it’d be morning, noon, or night.

Across The Board as a band has got the instrumental focus of musicians, vocal chords sounding decent, front and center with tons of melody edge. While the instrumental music portion of the track is again very catchy and upbeat, has the guitars, drums, and bass lines all working hand in hand with one another that it keeps the song in check with itself. It has the instruments and vocal chords working in what feels like a fast neck pace and feel, but yet it is more mellow driven as the song plays out.

It is like the band has already got so much going for them as it is, there is just so much they can do. Like for instance YouTube known for millions of videos across the board has had these guys produce over 150 videos alone, which is quite ground breaking as it where. Plus they have got an album called “Jane On Fire” with an EP as well “Amends”. Each release on its own doing its thing, really driving what Across The Board can do with their music creativity as a whole.

“Broken In Time”, as itself is indeed one of those tracks that can be found upon one of these releases, while the rest of the material also on these pieces of work, is just as stunning if not truly flawless. Across The Board or ATB if you prefer is just one of those acts that has got a lot going on, it is just as hard to keep up with it all really.