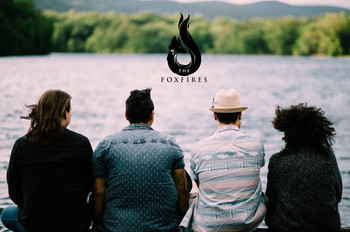 Indie rock seagazers The Foxfires formed in the late summer of 2013, as a side project which would later develop over time. Later on having the band go on to expose their sound and style of it being forged by the ethereal and sometimes dark nature of the post punk and shoegaze bands such as My Bloody Valentine, Ride, Joy Division, with the indie pop styling’s of other acts like The 1975, Two Door Cinema Club and Foals. Their sound just went with combining such various elements it ended up becoming their own uniqueness overtime. Speaking of time, since their forming the band would go on to develop themselves, playing showcases as well as write and record material that would be released in the form of singles, EPs, and first full-length album “Reawakening”. Three out of the four band mates got together to disclose all the input on themselves, their music, and future plans ahead.

Some music fans also love bible verse wall art and they can find many of these online. There are is an assortment of  beautiful and affordable pieces you can choose from.

NP: Can you introduce yourselves to our audience please?

NP: Who are The Foxfires, can you discuss the concept behind the band?

Adam: We’re a group of four individual brought together by our unique yet similar human experiences which have brought us together to create something much larger than ourselves. We have a message of tolerance, peace, love, unity, empathy, acceptance, and community to be the change we wish to see in the world. Our campaign of #ChooseLove and #Reawakening have been calls to arms to adopt these concepts forgotten by the mainstream and we deliver them through our music.

NP: Where did you get the idea for the band name, you planned it or came out just like that?

CD: The band’s name, Foxfire, comes from the folk lore term for bio-luminescence. And interestingly enough there’s bio-luminescent plankton that light up some waves, which ties back into our genre “Seagaze” – which is a more summer-sounding version of the Shoegaze genre.

NP: What type of music do you guys play, and why did you want to play this genre?

CD: As mentioned above, we call our music “Seagaze”. Seagaze is more of a summery/upbeat version of shoegaze, but still retains that dream-pop atmosphere. We also try to incorporate various sub-genres such as indie pop, 90s alt rock, folk and modern indie rock. This inspiration came from Bruce Lee’s philosophy on martial arts surprisingly. He believed that there were good techniques to take from all different styles of fighting, and when you think about it that’s about music too! “Be formless. shapeless. Like water. Water can flow or it can crash. Be water, my friend.”

NP: Did you know each other before the band was formed?

Adam: Well, I was formerly in a band called The Nightingale Effect with CC and after I had left that band, CC played shows with CD along with our former bassist, Billy Welsh. I met CD and our previous drummer through CC and Billy. We first met Brandon at a show while we were searching for a new drummer and there was instant chemistry between all four of us like there had never been before.

NP: Who would be the writer of the group, and what types of topics does your music cover?

CD: When the band started, I typically wrote about mortality and the consequences of choice. We all suffer, but it’s our choice to make a change for the better. Mortality can be both a terrifying and liberating concept, and taking that into consideration while writing our lyrics take very selfless directions.

NP: What about influences both musical and non-musical based, who would you say inspires you to do what you do?

We generally draw from a myriad of influences. Our genre, Seagaze, itself is a chimera of a genre. It combines elements of Shoegaze, Indie Rock/Pop, Folk, Surf Rock, Garage Rock, and Post Punk. Our tastes and what typically contributes to our music tastes are completely random. We draw influences from any and all genres/artists/writers/philosophers that we come in contact with. We all like to be diverse in our tastes and how they influence us. Bruce Lee’s speech about water is at the forefront of our genre name.

NP: Did you know that your most recent album “Reawakening” was released on believe it or not my birthday September 3rd?

Adam: We did not know that! The more you know!

NP: Since the release of “Reawakening” have you gone forth to write any new material, in terms of a follow-up?

CC: We have actually! CD and I mainly write the initial song ideas, then present them to the rest of the band to be rewritten as a whole. Oddly enough, most of the new material we’ve been working on since the release of “Reawakening” I started writing even before “Reawakening” was finished being recorded!

NP: Back on April 1st A.K.A. April Fool’s Day, you played a prank on your fan base, what were the reactions like and where did the idea for said joke come from?

Adam: The reactions were generally well received! Everybody seems to think I look like Michael Cera, so I chose to make a Scott Pilgrim joke cause I also happen to be the bass player. I don’t think I look like him, but if other people do, why not have some fun with it, ya know? We didn’t wanna do a stereotypical “The band is breaking up on April Fool’s Day.” We just wanted to have a little fun with it! We have a video on our YouTube comparing me to Michael Cera. It’s actually pretty funny!

NP: Would you ever consider bringing that April Fool’s joke to life, for a one time real life deal of a showcase?

Adam: I mean, I guess it would be awesome, but I think that we’d have to make the Chaos Theater exist and I’d have to find a ride to Toronto. I’d be so down for that Rickenbacker bass, though. Ricks are some of my favorite instruments. Luckily I don’t have a girlfriend with 7 evil exes!

NP: Speaking of showcases, what are the plans for you guys a far as playing shows and or touring, what do you have planned?

We have a ton of upcoming shows coming up including a few that we’re really excited about! We’re going to be playing at Northside Festival in Brooklyn and Pittsburgh Pride in Pennsylvania this June. In May, we’re playing the Jersey Shore Music Festival on the 20th! We’re also playing at Groove on Grove in Jersey City, NJ in June and the night after we’re playing at the Newburgh Illuminated Festival! We’ve got a big summer alone, so stay tuned! Big things in the works! You can keep up to date with our tour dates on our website and our bandsintown!

NP: Have any of you ever suffered from stage fright? Any tips for beginnings on how to beat it?

CD: I definitely have! The way I overcame this was by watching live videos of my favorite bands and seeing how they performed, then a went out to as many open mics as I could. The more you do something the more comfortable you get.

NP: What advice would you give to someone that would want to be doing, what you are doing, whether it’d be a band or an artist?

CD: Our best advice would be to follow your dreams and never give up. Also, never stop trying to better your craft. You may write good songs or a great performer, but there’s always room for improvement. Unless you’ve already “made it” there’s no reason to feel entitled. The reality that everything is finite is humbling. It’s possible to be passionate while still going with the flow of life.

NP: Would you like to add something more to this, or is there nothing else to be said?