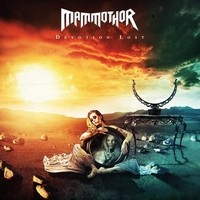 Mammothor is an American hard rock band from Boston, Massachusetts, formed in 2012. Travis Lowell fronts the group with powerful and versatile vocals. Berklee graduate Josh Johnson studied with guitar shred legend Joe Stump while Dana Sharpton has studied with virtuoso guitarist Greg Howe. The dynamic and steady drums of Nick Raby fill out the band’s eclectic sound. Along with Josh Johnson and Dana Sharpton on guitars, Dusty Mulholland on bass and Nick Raby on drums, they break some new heavier and more innovative ground together on their second release, Devotion Lost.

This album follows some conceptual factors, for those who get that much into their music, to get the most out of it. There is no stopping from the get go, as “Howling Baying Jackal” comes flying out of the speakers with a blazing fury. This track simply goes just about everywhere on the metal map. If you grew up on bands like IRON Maiden you can respect how precise these guys play their metal together. And that is not to call them an influence in every aspect, but it’s hard not to pick up on Maiden’s technical prowess and not hear any of that approach here. It is a solid album opener. But they go even heavier on the following track “Skin” if you like an even beefier sound, as it delightfully prods away with major bombast, evened out well by a slower paced vocal. But don’t be deceived, as he still belts it out like crazy on this. And the mid-section cooks up with some great percussion. You can’t help but groove with what I’d call an epic track in this one. And the guitars suddenly pick up with acoustic lines being soared over by electric in what is a nice little instrumental piece called “Anatma” which stand on its own two feet, even though surprisingly short. They answer back with the pulverizing “Faith Healer” which is a bit all over the place compared to the previous tracks, but that looseness is a welcome change thus far. Somehow, they lose no tightness in the process.

There is a strong 80s vibe on this album without sounding dated, and a few bands lately have been achieving this by incorporating guitar solos back into heavy rock. However, Mammothor accomplish it with no punches pulled. So, perhaps they’re doing things for that darker side of metal to keep one foot in the past but pull their heads into the future. And although “Shadows Of Oblivion” rides the line between heavy and melodic at times, it also goes above and beyond in both areas. Not my favorite pick but by no means alienated from their overall aim. It certainly goes the distance if that is your thing. I like the guitar outro bit. But on “Elusive Engineer” the sound thins out a little, and that is just because it’s a ballad. And not your average one at that. I get a little Alice In Chains feel at first, but then a strong Queensryche influence clearly takes over in the vocal department. This is a killer piece of music with some great lyrics, and a nice change of pace in the middle of the album, backed by some fine guitars. But you do get the feeling it has been done before. In my case, this works to blend their more original ideas with. And it even comes back with a little more Alice and Chains by the time it is over, it’s that howling vocal which seems to glide between the two influential singers. Top marks by all on this. I get it.

On other tracks such as “This Is Not An Exit” there are more searing guitars and vocal swagger to carry the. For instance, on “Generation Thief” they fly on both the riffs and solos, in a retro but modern fashion. The lyrics on the former aren’t as interesting nor powerful as on the latter, but they do the business either way, especially on the latter track. But “Blood-Soaked Candy Heart” stands out as one of the more pedestrian cuts, but at the same time it loses no steam. This band has some ability to pull that off without going too far in either direction whilst throwing in little instrumental gems like “Launch Pad” with its bass note reverberation, which leads into another cut with a bass intro for a cool mixed transition on the more industrial sounds of “Tyrannicide(Reprise)” which reminds not to forget their debut album which came before Devotion Lost. Once again, they go all over the map without falling off it here. More killer guitars and great time signature changes make this a very progressive rock band, whether they’re pushing a heavy or light theme. They push for more as they break the right rules and leave the rest be. It’s bone crushing, yet soothing in all the right places. And the closing track “Pillar Of Simeon” balances between all of the elements they’re bringing. This band works hard as they find their feet in all the right places, so far, on their sophomore release. I would expect all fireworks to come together to combust even stronger on their next one.