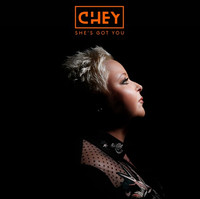 Whenever an artist or band goes to the length of releasing a song, in various ways it could work in their favor or it could not. In the case of an artist by the name of Chey with her latest and newest song turned single “She’s Got You”. She has taken this song and released it twice. In its original context as well as released it in a remixed version. How do these two hold up side by side? Well listening to both tracks one after the other it has them both sounding quite alike actually.

The original version of “She’s Got You”, is for one a follow up to her last song “Dirty Love”, released earlier this year. But besides that “She’s Got You”, is a pop song with a power ballad embedded within in. If that makes much sense. It’s like take that one track “Every Rose Has Its Thorn”, by Poison. That song is indeed a ballad track, you can tell from the atmosphere and tone of the song. While with this track that is “She’s Got You”, you have that energy of a ballad, except with the added effect of the weird noises placed here and there; it makes the song more of a downer and let down. If those weird noise effects were not placed within this track, it could work a lot better as a ballad than it is claimed to be right here.

While the remixed version of “She’s Got You” has got a bit more flare going for it. It is just a tad more upbeat, easy going, and rather enjoyable than the original version. The remixed version does have the weird noises placed here and there, but it makes the song work more so, than the original version has with them placed in. In regards to the song itself, it is a pop power ballad which sounds decent.

Nothing more, nor nothing less can be said about it. As for both versions of the song, and the video to accompanying this release, the video is made of the original song, having the video version be very in-depth, having lots of motives of emotion flowing for it. The original song and video work well together. If the remixed version would have gone with the video, it would have not worked if at all. So sticking to the original version as the right way to go with the video release. Again both versions of the song each has their own thing going on.

The remixed version being more upbeat and energetic, while the original is more laid back and easy listening. The noises placed throughout may get an annoyance out of the listener after a while, but sometime later you get accustomed to it. As far as Chey as an artist personally, she is quite good at singing. Her vocal range being quality sound with decent perfection. She brings to mind other artists like perhaps Adele but not sounding precisely like her but a lot like her, with her own source of style and tone going for her.

All in all Chey’s “She’s Got You” is one of those songs, that you can enjoy or you cannot. It just varies on the person in question, because Chey as an artist, in general, she is good but is her music good enough for you, as a listen, only time will tell for certain.