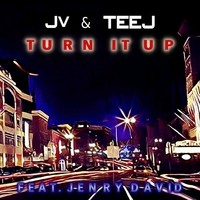 JV and Teej have known one another from an early age, in fact it was during the evolution of the golden era of the hip hop genre. This time frame, would have the duo writing rhymes together, that would later become their own unique yet signature based brand of own creative music.

That said, the duo would go on to write and record for a brand new release in the form of a new song turned single called “Turn It Up”. Which has already made it’s rounds around the music networks, from FM radio stations to various streaming platforms, the song has made its way around from all sorts of areas. How does the song sound and compare to other hip hop rap artists and bands out on the scene, well it sounds decent enough. It has that catchy beat going for it. As well as lyrical context which is nice, having the lyrics ride atop the music, as it is played in the backdrop as the lyrics and melodies are played on the foreground of it all.

It is a decent sounding piece of work. The song may not have it all in check at times, but it is a decent sounding track of material. Listening to it a number of times in a row, had it become more listenable than the first set of times. Hearing it for the first time, had a cringey vibe going for it, where you don’t want to hear at all. But after a while the song became more listenable and enjoyable too at times. It ended up becoming one of those songs that you could possibly hear elsewhere than the radio platform. Perhaps even at a local food place if not even a club scene, that’s what this song brings out for it. It has that formula that works for it, allowing it to be one of those tracks that stands out wherever it may play out. If any of that makes sense at all that is.

In any case though the duo that is JV and Teej, they work well together. They are able to play well off one another, as one wraps up their segment, the other plays off it, continuing it with their own sense of style. It makes the music and this particular song work for them really well. In fact, it has the song become more noticeable at times. Meaning that it is more catchier than it seemed to have been when first listening to it. You get a whole another reaction of feeling for it, as the song plays through. It becomes a song that is catchy, upbeat as mentioned briefly, whereas also becoming one that you can find yourself hearing at any time of day and recognize it instantly, is how well this song works as well as it’s duo of vocalists accompanying it.

“Turn It Up”, ends up being one of those songs by a set of artists that will be going places with ease. These guys have got what it takes. There is no doubt about that. Their style and sound presented here is just the tip of their abilities as musicians. Surely this will lead on to even greater things than having them just “Turn It Up”.