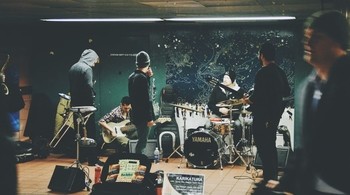 So you joined a band. You bought a guitar, took a few music lessons, shelled out the money for an amplifier, found a few friends who claim to be mildly proficient on bass and drums, and came up with an incredible band name. That’s all it takes, right? Unfortunately, you’ll never be a decent group if you don’t find a space to practice in. That’s why it’s so lucky that so many neat jam pads exist in the world!

Garage
This is an all-time classic place to have band practice. The Strokes were born out of a garage, and so were the Hives, the Vines, Nirvana, and an entire subgenre of rock and roll. The privacy, access to electrical sockets, and sheer excitement of playing in a garage can’t be beat. Just make sure that your parents can tolerate the noise, or your neighbors don’t go to bed too early.

Storage Unit
Can’t stand being in your parents garage? Take a trip out to a storage unit facility. You’ll have the same amenities with more creative freedom, for a relatively small price. You can reduce the price even more by inviting other bands to practice in the space as well: sharing the space and trading off nights or weeks can drag the price down to extremely affordable levels. Just make sure the facility allows you to do this before committing to it.

Music Store
What could be better than jamming in a space that already has pristine equipment and limitless amps and cables? If you work at a music store or know a friend who does, the store manager might be convinced to let you stay and practice after-hours. Most music store employees still harbor rock and roll dreams—why not take advantage of the boss’s kindness and start down the path to stardom?

School Practice Room
At most major universities, and even some community colleges and high schools, there are practice rooms in the music wing that can be rented out by bands and artists looking for some quiet practice time. This rooms are soundproof and fully electrified, and might not even cost anything depending on if you or a friend attends the school. Definitely worth looking into!

Local Bar
Lots of small-town bands have special deals with local bars about practice space. Often, if the band plays occasionally for bar patrons at night, they can practice on the stage during the day. What could be better than practicing where you’ll play later—and maybe drinking a beer while you’re strumming?

Playing in all of these jam spaces is fully legal, and often simply depends on the kindness of one person. You’ll never really know until you ask, and you might be surprised to find out how simple it is to find a place to play with your bandmates. Just don’t forget the little people when you become famous!