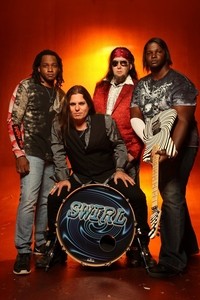 Swirl is a first class hard rock/metal unit based out of Southern California who, after a number of false starts, has settled on a creative direction invoking the full range of their talents. Earlier iterations of the band focused on a much more overt commercial sound, but the release of last year’s self titled heralded a sea change in the band’s direction finding them coupling a genuine hard rock strut with superior musicianship that never cheats listeners of the physicality and brash attitude we look for from the best of this genre. Anchored by the fleet and ferocious guitar attack of Duane “DT” Jones and drummer Brian “Bam Bam” Jones, the band is a monster hard rock unit with grit and musicianship to burn. The three songs they’ve contributed to the soundtrack of Ditch Day embody the quality of their transformation into the unit we hear today.

Conjuring up some credible rock and roll swagger might seem easy, but it isn’t. We’ve heard several decades of bands pursue these same ends, so it isn’t enough for a band to just hit some familiar marks and expect fans to flock to them. The first song included on the soundtrack, “Spell”, has a familiar edge, but Swirl brings something different to the game that their lesser can’t manage – individuality. Much of this comes from guitarist Jones and lead singer Alfred Ramirez. Jones has an unique style on the song combining a spectacular command of fundamentals with fiery six string flourishes and flash never seeming out of place in the larger scheme of the song. When he rips through runs, it’s never just for the sake of showing off. Ramirez, often ably supported by bassist Shane Carlson’s backing vocals, mixes a well-honed front man strut with bluesy gravitas and an excellent vocal range for the material. Carlson and drummer Brian Jones are a first class engine room and “Spell” kicks off with a memorable bass line that grabs your attention and doesn’t let go. This song sounds like a natural choice for opening a live set.

The two other tracks included on the soundtrack, “Rise Up” and “We Are Alive”, share some thematic similarities. Rather than penning a bunch of songs about hard living and chasing women, Swirl stands out for their ability to write tracks delivering a clear message and these passionate paeans to self-empowerment and making your voice heard are exhilarating without ever falling prey to clichés. The band varies their musical approach enough to keep listeners guessing about what turn they’ll take next – few metal or hard rock bands are able to keep things accessible yet consistently illustrate their chops. Swirl manages to do that and more. These three songs are culled from their recent self-titled release and are an ideal representation of the band’s sound. Their inclusion on the Ditch Day soundtrack rewards Swirl with some much deserved high profile attention and helps set the stage for their next career move.