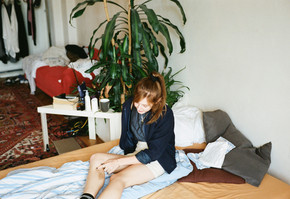 You Know What It’s Like is an album for inbetween days, and occupies inbetween states: plain-speaking pop, disorientated by dub. Psychedelic folk delivered with (post-)punk economy. Drifting in space while still tethered to the ground. Astral tones blurred with earth sounds: wood, bone, breath, skin, dirt. Ending and beginning, dying and becoming. Longing for adventure and an unquiet life. Struggling to get out of bed.

This is Carla dal Forno’s debut solo album, following time in cult Melbourne group Mole House and an earlier association with Blackest Ever Black as a member of F ingers and Tarcar. Her voice is an extraordinary instrument: both disarmingly conversational and glacially detached. It has something of the bedsit urbanity of Anna Domino, Marine Girls, Antena, or Helen Johnstone – stoned and deadpan – but it can also summon a gothic intensity that Nico or Kendra Smith would approve of. This voice is the perfect embodiment of dal Forno’s emotionally ambiguous songs: their lyrics rooted in the everyday, observing and exposing a series of uncomfortable truths. This voice asks difficult questions of singer, subject, and sung-to.