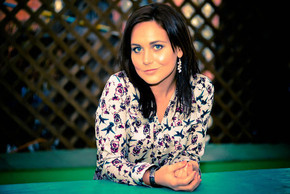 After the success of her previous two albums, 2013’s “Lost and Found” and 2014’s “Bloom, Unfold, Wither” EP, Dezelle moved across the country from Los Angeles to New York in search of new beginnings. Known for her thought provoking lyrics, honest storytelling, and beautiful melodic flourishes, her unique vision and distinct sound have allowed her to carve out her own path on her up-coming EP “Room For Two” slated for release later this Summer.

On “Alchemy,” Dezelle brings a relaxed joyfulness to the refreshing trip-hop-infused folk sound that makes up her new single. Her voice undulates across a pittering beat, creating a dream-like state rich in visualization, built upon storytelling. Soft, lilting instrumentation cascades beneath her vocals, injecting a sense of uncertainty as she says, “who’s to say where it’s going, knowing where we’ve been, I’d want to see you again.” “Alchemy” is a journey that reflects the changes in the musician’s life, seeping into the very fabric of the music itself, taking her signature sound to a new level, allowing it to morph into a space full of self discovery and experimentation.