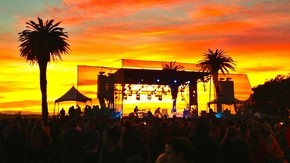 The modern music festival is about more than the headlining bands these days. As an increasingly savvy audience gathers for the multi-day events, top chefs are also flocking to festivals to feed these music-loving, foodie hybrids. An extension of the dual food and music festivals, like the sweetlife music + food festival backed by organic salad chain sweetgreen or the Atlanta-based Candler Park Music and Food Festival, these combined events are a big bite of culture.

What’s drawing chefs to the festival scene? There are a few big benefits for chefs who work the festival circuit. Here’s how the “who’s who” of cuisine today ended up taking festival catering to the next level.

Small restaurants, even those run by big name chefs, often don’t have a lot of money for publicity. Maybe they can afford a PR person for a few months to get them off the ground or maybe they’re just hoping social media and word of mouth will carry them. But big music festivals like Coachella or the Governors Ball have tons of money for press. When chefs sign on to cater these festivals, they’re also getting that publicity boost.

Of course, music festival PR only lasts for a few months, mostly during the summer, but featured restaurants reach a big crowd during this time. Then, for the rest of the year, they hope to see returning fans who first had their food on the festival circuit.

Going to music festivals is good publicity for chefs, but why do festivals want them there? What happened to the days when a burger or a cold beer was enough to carry attendees through?

The main reason chefs have been welcomed into the festival world has to do with the expanding mission of festival planners. With so many competing events, festivals are working hard to create an overall experience for their audience. Celebrity chefs are part of this experience. If you can get a taste of the latest dish by Morimoto or Tim Love while listening to your favorite band, you’ll spend the festival in an unforgettable state of bliss.

The Rise Of The Rock Star Chef

There’s a lot of food TV on the airways these days, and all of these shows have contributed to the concept of the rock star chef. Young people who otherwise might have little exposure to the big names of the culinary scene have been watching these chefs on TV for years. Chefs have built a fan base that may never have tasted their food.

This is what makes the music and food combo so powerful – festivals target the youth demographic and then give them access to the kind of food they’ve only seen on TV. This year’s Coachella festival, one of the biggest names in the festival scene right now, will feature the incredible combination of everything from Guns N’ Roses and LCD Soundsystem to Top Chef stars Antonia Lafaso and Michael Voltaggio, as well as food from the masterful Roy Choi’s Commissary.

The other bonus to combining big food names and big festivals is that this overall set-up expands the festival audience. Older music fans who don’t really want to sweat in the sun while eating overpriced fries will turn out for an event like Bottlerock, where this year everyone from Stevie Wonder to the Lumineers will play backed by food from Morimoto, Belcampo Meat, La Tocque, and Thomas Keller’s Bouchon Bakery. This isn’t your kid’s Warped Tour scene. This is something entirely new.

The status of the celebrity chef today couldn’t have been imagined even a decade or two ago. But today, food and music are a powerful tag team, combining to produce events even the most finicky foodie will enjoy.