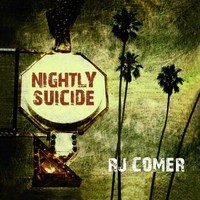 Based in Los Angeles, RJ Comer has released his new EP called Nightly Suicide in March 2016. It is an absorbing and thought provoking album of six perfectly produced songs, which impress you to the marrow of your bones and leave you replaying them and reflecting, while the music has stopped long ago.

RJ Comer definitely has some resemblance to Chris Rea. His music somewhat feels like Chris Rea’s a bit harder version, – with those groovy rhythms and gin and fog, deep, manly voice.

RJ Comer delights not only the ear, but the soul, as well as something deep inside me, as a woman. It is fair to listen to his forcible voice and to look at him perform. I like his dignified, confident style, it shows the peace of mind of a man who’s been through ups and downs and arrived to his stable state of being, comfortable and satisfying.

RJ is a wonderful storyteller, that will take you to all the places he has been (and he has been to many) and share the tales of his life; so that you will be only wondering, whether his narratives are really true or they are merely the incredible work of his imagination.

RJ Comer’s music captivates with its cool and hot guitar riffs and solos, swinging beats and remarkable lyrics. You can feel the author’s dedication to and sincere love of blues and old school Americana rock.

One may disagree, but I find RJ Comer’s tunes entrancingly romantic…well, not in that shallow, mainstream sense, that always has to do something with a man and a woman, which I find extremely vulgar; but in a broader and deeper sense, that involves a person with their never ending Journey, the whole perspective of life, the feeling of the energies flowing through one’s experiences, giving insights and broadening the vision; the very essence of existence, matching things happening, bringing all the elements of life chemistry together, talking in signs…it’s rather about one’s relationship with themselves and the universe. I can feel this romantic vibe in RJ’s songs, though they are, surely, down to earth, at the same time. He’s a stroller that accepts everything the way it is, using it all to write fabulous tunes.

The singer-songwriter has got a crashing sense of humor, which is boldly sarcastic and shows the attitude and wisdom of a cool guy. He has figured this life out, in and out; he has nothing to prove, because he has proved everything to himself, what others think is irrelevant, – he’s just having a good time.

The main picture that I see before my eyes, listening to this wonderful artist’s tracks, is of a road, leading to, only god knows, where; and the wanderer doesn’t want to know, where it will take him; he belts his battle scarred guitar on the shoulders, dons his cowboy hat and hits the trail, having promised to send us fascinating story-songs once in a while.

Worth listening to. Believe me.