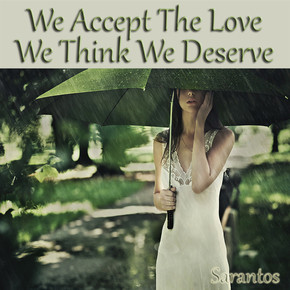 New rock song “We Accept The Love We Think We Deserve” is an emotional piece about domestic violence.

Now that the Super Bowl is over, the NFL will have a chance to reflect on quite a year. Domestic violence was frequently at the forefront of the 2014-5 season and unfortunately for all the wrong reasons. Sarantos is proud to release the latest rock song “We Accept The Love We Think We Deserve.”

Violence against women and children results from the use of force or threat to achieve and maintain control over others in intimate relationships, and from societal abuse of power and domination in the forms of sexism, racism, homophobia, classism, anti-Semitism, able-bodyism, ageism and other oppressions. The abuses of power in society foster battering by perpetuating conditions, which condone violence against women and children.

“This a powerful rock song about domestic violence in our society today,” says Sarantos. “It seems like this topic was in the news a lot in the last year between the NFL, Bill Cosby and so many other stories that made headlines. My heart goes out to the victims. I wrote this song to not only start a conversation on the matter but to hopefully help others find a solution. This is a hard rock song about a man who has made many mistakes in his life. He constantly takes emotional abuse from his partner. Somewhere along the way, he has lost his faith. Thru the words, the bruises and the blame though he stays right there… Why does he stay right there? I hope this song helps drive home the message throughout the world that domestic abuse is simply not ok.”

33% of any music-related sales profits from this song are going straight to the National Coalition Against Domestic Violence.

The National Coalition Against Domestic Violence (NCADV), has worked since 1978 to make every home a safe home. NCADV works to raise awareness about domestic violence; to educate and create programming and technical assistance, to assist the public in addressing the issue, and to support those impacted by domestic violence. It is the mission of NCADV to work for major societal changes necessary to eliminate both personal and societal violence against all women and children.