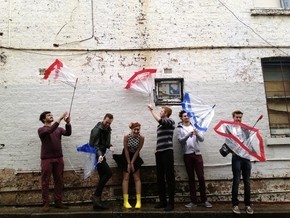 Jagged Jayne emerged in September last year as an energetic and oh so quirky six piece. They explore sounds from a haze of musical influences and develop an infectious vibe on stage. The group all met at Sydney’s Australian Institute of Music and are made up of ‘The Brads’ on drums and bass, Jake on electric guitar, Chris on keys, James on trumpet and Simone on Lead vocals.

In just under a year Jagged Jayne have played alongside great artists such as Dappled Cities, TigerLily, Nina Las Vegas and headlined in brilliant venues along the East Coast such as Sydney, Byron Bay, Brisbane and the Sunshine Coast.