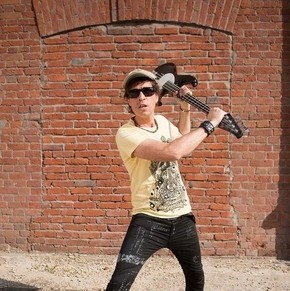 MAX is a Russian musician and recording artist who is best known as the frontman of the Moscow rock band Nogu Svelo!, which has won numerous awards throughout their lifetime including a Russian MTV Movie Award, the MTV Special Prize, the popular Russian TV Channel 1 “Star” award and many other recognizable awards. Alongside of MAX’s music career he constantly takes part in Russian TV shows. He had a successful stint on “The Last Hero”, the 1st Channel’s version of the world famous reality show “Survivor”.

Now MAX is busting out his outrageous brand of rock on US soil this year with his upcoming record entitled “Fast Food Kids”. His first single, “My Name Is Dick”, was produced by 2 time Grammy Award winner Howard Benson (My Chemical Romance, P.O.D) in Los Angeles, CA. Paired with an equally as impressive video, “My Name Is Dick” is reminiscent of National Lampoon’s Animal House with a dash of Mad Magazine and Howard Stern like humor thrown in. The video is full of drunken debauchery, an extreme take on Beer Pong, and Max hurling on Captain Jack Sparrow.