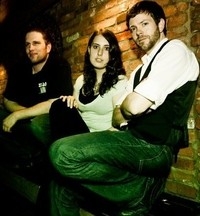 It’s Electronica-a-plenty on Distoria’s debut EP, The Periphery. Organic instrumentation finds itself bolstered with the aid of a plethora of machine-generated sounds: piano and accompanying MIDI; drum set and drum pad and a host of electronically laden sounds provided by audio engineer and bassist Mo Mezrich. The seven-track album is essentially electronic-driven Pop Rock with approachable vocals, layered soundscapes and the ever-present vein of electric current running through the breadth of the tracks.

Opening to the distorted electric guitar of “Behind Red Doors” the fuzz immediately gives way to the torch bearing piano melody that sounds like a Coldplay arrangement I heard some time back. Helena Martin’s vocal delivery and piano share the spotlight at the foreground of the track while the fuzz guitar reappears at the chorus. Very radio-friendly, they could have very well opened the album with their first single. The mysterious clicks and clanks of “23” are the first appearance of Distoria’s heavy Electronica leanings. Theses prevail through the body of the track lurking darkly in the background but just underneath the main melody and chained to the driving piano work. Again, Martin’s vocal delivery stands at the foreground and ushers the track along. “Challenge The Sun” opens to more urgent piano and vocals while the electronics fall to the wayside and I like it. The raw performance grit shines on this one and lends a bona fide element to the song. The urgency of the track creates a tension in the listen without any bogging down by heavy backing sounds. “Hundred Year Storm” features more standard instrumentation and electronic interplay opening to drone hum and dour piano notes. The vocal delivery frames the piece while the backing drone and drum pad play the role of fills. Just before the midpoint the two veins converge into the gist of the song as a whole. With a lighter touch on the Electronica facet, this track illustrates the appropriate balance between the two.

I feel Distoria commands a strong presence when playing organic instrumentation (as evidenced on “Challenge”) but the placement and inclusion of two pure electronic tracks seem out of place. The 19-second “The Hardness of Things” and the 44-second “1875” didn’t add anything to the album for me and frankly seem out of place, aside from segues from one track to the next. The quartet has the prowess and sound to stand on their own merit, devoid of any heavy leanings of generated facets of their music. I get it as a stake to bolster the sound already there but as a driving force of the songs, I feel it takes more away than adds.