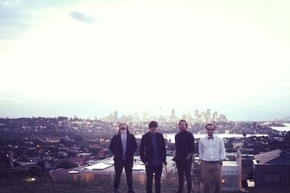 Following from their successful debut mini album ‘To You’ earlier this year, Sydney’s Indie Rock/Folk quartet Battleships have revealed their new video for album highlight ‘As You’d Begun.’

They have found themselves in high rotation on Triple J, with further support from 6 Music’s Lauren Laverne and Radcliffe and Maconie.

Song By Toad called previous single In Retrospect a “cracking tune”, and Never Enough Notes stated “Haunting and hypnotic riffs coupled with moody, atmospheric vocals are what makes us sure Battleships will be on our radar for a while yet.” They have also become a “new favourite band” of the Communion lot.