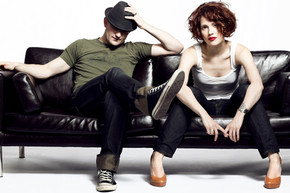 Canadian alt-pop duo Ash Koley–Ash Koley and Phil Deschambault–will release debut album Inventions in the U.S. and rest of the world on May 8, 2012. The album, which was previously only available in Canada, was produced by Deschambault and mixed by Grammy Award-winning mixer Tom Lord-Age. In anticipation of the release, the band has unveiled a brand new music video for album track “Mary The Inventor.”

“For us, creating music is like building little inventions. Every song we write comes from an idea we then craft, construct and design into something we both fall in love with,” said Koley of the album title.