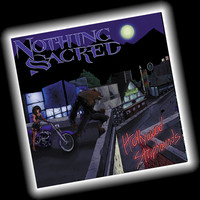 LA Based 4 piece Nothing Sacred releases their debut EP Hollywood Striphounds earlier this year. The music has everything you would expect from a production of this flavor, including music that is explosive, loud & fearless. You’ll find catchy melodies layered everywhere, & of course guitars that bite & solos that will make your head spin. Nothing Sacred definitely knows how to crash a party. Hollywood Striphounds has the aftertaste of a vintage 80’s early 90’s musical production. Music reminds me of Warrant, Motley Crue, Greatwhite, etc. In my opinion it was released 20 years too late? It doesn’t mean they don’t have mojo. The year is 2011, & although the music scene has changed dramatically over the past 5, 10, 20 years, there are still artists like Nothing Sacred who somehow manage to exist amidst the Guitar Hero hype. This CD will be a joy for guitar enthusiasts out there who enjoy technically savvy guitar, shredding solos, & a classic 80’s late 90’s powerhouse rock delivery. The Bottom Line — This EP is a solid statement from start to finish. If you like your music served hot to the touch, with solos that are fast and furious, & songs reminiscent of the Hair Band glory days — then Hollywood Striphounds belongs in your hands right now.