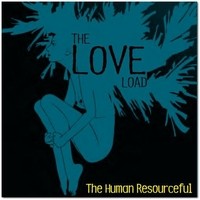 Over the years we’ve seen punk, hard rock & even alternative rock bands slowly erode into over-commercialized, corporate puppet shows. Talking to many music fans out there, the response is overwhelming. Give me something new, something raw, something that’s pushes hard & is going to kick me in he ass. Something that doesn’t sound like — well Nikelback. Give me band similar to The White Stripes, Nirvana, Foo Fighters with a jagged edge, a bloody tip & a no holes barred musical delivery. Give me something real!

So across my desk slides the new CD by D.C.’s own The Love Load entitled The Human Resourceful headed up by guitarist/singer/songwriter Ted Watts.   What I heard put a smile on my face, finally a band that gets it. The Human Resourceful is some of the best new music I’ve heard in quite a while & delivers many of the aforementioned items I spoke about. You want hard rock, you want punk, you want music that is packed to the hilt with high adrenalin? Well look no further. This CD covers all the bases delivering solid playing & amazing songwriting & a musical flair that just lets it all hang out.

The Human Resourceful by The Love Load is what we’ve all been waiting for.   It’s a polished sounding musical production from start to finish served up hot with great playing, solid writing, & a jagged edge musical delivery. It’s definitely a musical production that gives us a fresh glimpse at a hot new band but takes us back a few years — before everything started sounding like — well Nikelback.

2 comments for “The Love Load, The Human Resourceful”