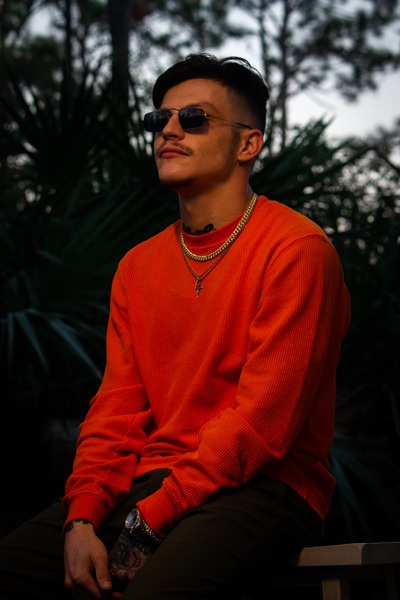 Coming out hot, the promised child of Dayton—this is Ninebay Jakub. In hard-won homespun rhymes, this Ohio rapper draws inspiration from fellow Midwesterner Kanye West, with nods to Jack Harlow and Mac Miller. After a tragic fall shattered his wrists and ended a promising football career, the lifetime fighter picked up his pen and pivoted to the cipher. Though the heartland will always be in his heart, Ninebay pulled a Lebron James and brought his talents down to Florida, where the sunny vibes nourished his skills and swag, allowing him to drop single after single through 2022. If anyone catches him on the beach in his Bengals gear, ask for an autograph – before it’s too late.

The fresh young emcee plans to release his debut full-length album Ninebay later this year, then bring his talents on tour. First Dayton, then Fort Myers, and next, the world.

It’s the perfect soundtrack to kick back with bae and reflect on what life was like before finding each other – and how there’s no need ever to go back there. Over a hazy, seductive beat sculpted by his friend and producer Eddy Rock, Ninebay chronicles the ups and downs of love that ultimately land us with the one. A patient staccato of one-liners through the chorus gives way to more impassioned verses, paying homage to Ninebay’s fellow heart-felt emcees like Drake. The song returns to a laid-back level, setting a mood for all the lovers listening to start making moves, if you catch our drift.

In the music video for “Found Love” (directed by Ninebay’s friend, collaborator, and fellow Floridian Mogul), Ninebay is fully open and vulnerable. Standing in a palm tree-strewn scene of his adopted Fort Myers, the rapper lays it out plain with nothing to hide. This swaggy young rapper is draped in drip, coming into his own and unafraid to rap about the real-real. Graphic and smoke effects build tension and allure as they enhance the chill and tropical aura of the smooth serenade. Pop on “Found Love” and find yourself in a more lovely state of mind.