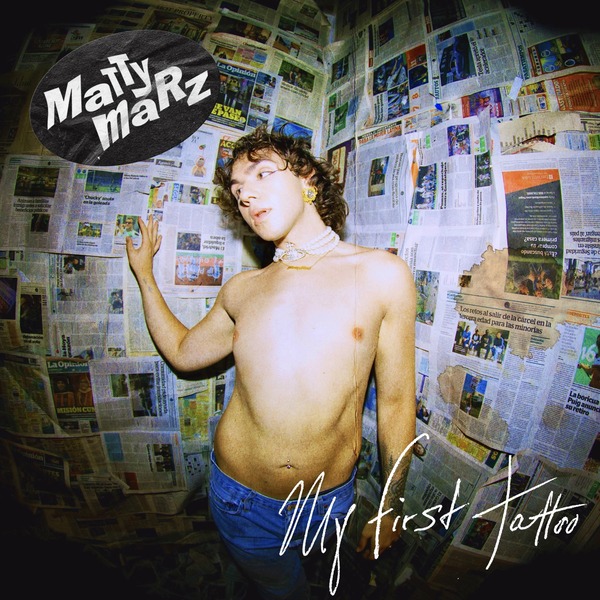 Matty Marz’s single, “My First Tattoo,” brings ‘80s music right back, front and center, with his intentionally stuttered opening vocal line. He sings it over an upfront keyboard part that has all the feel of an MTV video. Shortly in, Marz points out, “You sure left your mark.” Yes, like a tattoo – even that first tattoo – makes one especially memorable mark on a person. Such is the case with this one that’s left a distinctive imprint on Marz’s heart.

Later, though, Marz also sings about having a broken heart. With this line, the tattoo that made such an overwhelming impression sounds to have become a bit of a painful reminder, instead. It’s a funny thing about tattoos; some seem like such a fine idea when they’re first applied, but as people get older, they oftentimes outgrow their tattoos. Some get tattoos that say ‘forever [insert name here], only to move on to another lover later on. They then have some explaining to do. Obviously, forever didn’t literally mean forever in this case. Instead, it’s a sad reminder of how, what once seemed eternal, ended up having a much shorter shelf life.

One song verse describes young lovers appearing on a movie screen, where it seems like destiny has brought two people together. “But nothing’s ever as it seems,” Marz reminds us. This is especially true with young people. It’s all too common for young people to act way over confidently. Nobody can tell them they’re wrong or tell them what to do. They know beyond the shadow of a doubt that they’ve found a love that will stand the test of time. Then they grow up and find out they were wrong. This sounds like what may have happened to Marz. There’s nothing wrong with young love; most all of us experience it to some degree. Yet, when we’re young, we just don’t fully understand love. We’re not really always good at commitment. We get ourselves into situations we believe we’re ready for, only to discover we just weren’t prepared for them after all.

“My First Tattoo” is a driving pop song, which incorporates keyboards, yet sounds like a rock song. In fact, it could have just as easily been recorded over guitar, bass and drums. It’s a little punkish, too. This is due to the urgency of Marz’s vocals. He completely invests himself into it, as though he were actually living it all out before our very ears.

“Didn’t want to see you cry/Didn’t want to say goodbye,” Marz sadly sings toward the track’s end. He obviously regrets how everything ended in this relationship. Yet, you also get the feeling he remembers it fondly. It truly meant a lot to him at the time, and he wishes he didn’t have to spill out his regrets in song. Yet, in the same way one stares at a tattoo that just doesn’t one’s body any longer, he’s staring back at a relationship that burned bright before it burned out. Tattoos eventually fade, but one is left feeling Matty Marz’s memory of this partnership will not fade any time soon.