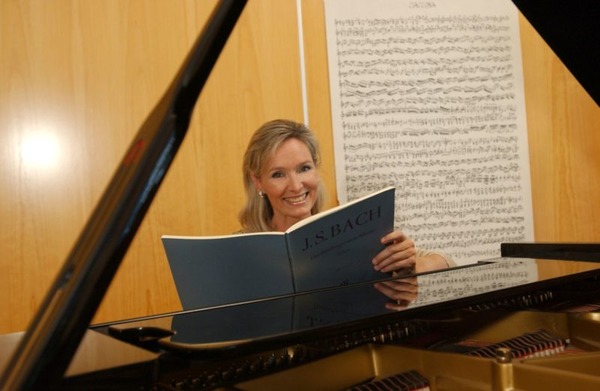 Maybe you haven’t heard of Elizabeth Sombart or do not know a lot about her. It isn’t my first exposure to Elizabeth Sombart and I can proclaim with confidence it will not be your last, but understanding why her name may be unknown or scarcely recognized isn’t difficult. Classical music artists have a hard road in their professional lives and, invariably, scurry for the climate-controlled environment of academia so they may continue indulging their passion. There are a few, however, who manage to carve out niches for themselves in regional or national orchestras.

Sombart, however, is not a musician alone. Nor is she an entertainer – though her performances are, invariably, enjoyable and elevating. Sombart has commandeered music as a vehicle for bettering the public good through the establishment of Fondation Résonnance in 1998. This organization promotes and furthers the spread of free music education throughout French society and beyond as well as venturing into orphanages, prisons, jails, and hospitals to spread music’s healing gifts there as well. We need those more than ever.

Music, as the cliché goes, pours out of her. She has played with the Royal Philharmonic Orchestra, toiled with some of the genre’s most formidable talents, and has taken on challenging composers in the past. Beethoven was her last choice, but she recently turned her focus toward Frederic Chopin’s Nocturnes. The resulting work Singing the Nocturnes is, as its title lightly implies, a near-poetic interpretation of Chopin’s classic pieces. The lyrical heights that Sombart’s playing reaches during this collection help recast Chopin’s work in brilliant new light for listeners.

It is not difficult to believe after hearing this collection that Sombart is one of France’s most decorated musicians. Her 2006 rise to the rank of Chevalier de l’Ordre National du Mérite for Lifetime Achievement and elevation two years later to the station of Chevalier de l’Ordre des Arts et des Lettres places Sombart among the elite and for all the right reasons. She has contributed quantifiable benefits to French society without championing her self-aggrandizement. It is increasingly rare.

You see the foundations of this attitude present from the beginning. She is a bit of a childhood prodigy who first started playing piano in a serious way when only seven years old and by age 11 entered Strasbourg Conservatory, the first of many fine academic institutions charged with helping her perfect her craft. Working with a diverse array of important composers and instructors such as Buenos Aires’ Bruno Leonardo Gelber and London’s Peter Feuchtwanger has helped increase her appeal.

It has appeal with no end in sight. There does not appear to be anything that Elizabeth Sombart cannot do or else address and I expect future musical releases from her will be looking toward the same across-the-board success rather than paring down their expectations from here. I expect w will be seeing her unveil new and increasingly clever ways to put money in the hands of genuine creatives who need it to continue with their work and, more importantly, their lives.