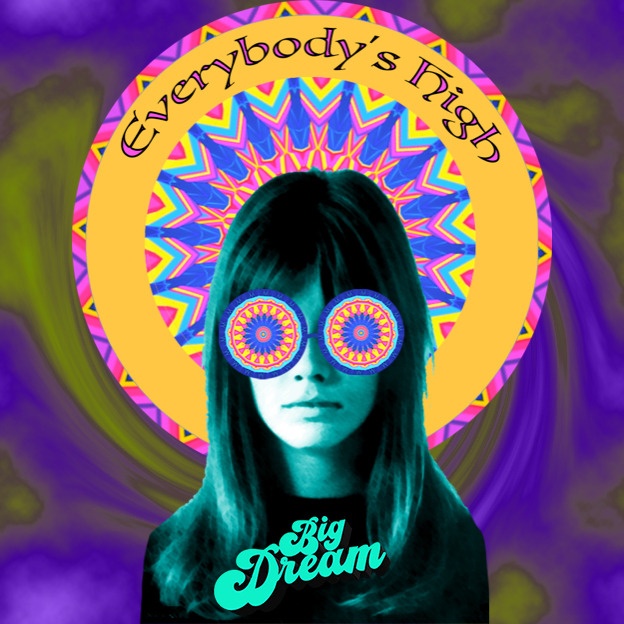 As the summer of 2022 draws to a close, you’re forgiven if you feel a little low. There have been far too many things for all of us to get down about — things that are difficult to dismiss. But wouldn’t it be wonderful if, instead, everybody was high? Don’t we deserve, at least for the duration of a three-minute pop-rock song, to have our spirits soar? Isn’t it about time?

Godfrey Diamond thinks so. The longtime visionary producer, songwriter, and multi-instrumentalist imagines a world filled with celebration, and “Everybody’s High,” the first single from his new project biGDream, is the vehicle for that aspiration. This radiant pop-rock track — one decorated with layered guitar and synthesizer, graced by angelic vocals, and spiked with an old-school saxophone solo — is suffused with joy from the first piano twinkle to the final downbeat. It’s a perfect expression of Diamond’s essential optimism and compassion for a human race struggling to survive a time of darkness.

And if there’s a right man for a global cheer-up job, Godfrey Diamond is that man. His five-decade career in popular music has been dedicated to the pursuit of positive vibes. He’s never been hedonistic for its own sake; meaning and coherence always matter to him, but given an option, he’ll encourage his listener to put worries aside and celebrate finding their bliss. It was Godfrey Diamond, who, with his brother Gregg, got America dancing with the disco classic “More, More, More.” In the 1980s, he worked with some of the most party-ready rock artists in history, including Billy Squier and Aerosmith. His winning streak ran straight into the 21st century when he applied his talents to records by Downtown New York club attractions like Princess Superstar and The Bogmen. Miraculously, Diamond even got the famously taciturn Lou Reed to reveal his loving side: at the age of 21, he produced Coney Island Baby, Reed’s loosest and most playful solo album.

Fusing talent is what biGDream is all about: it was conceived as an experimental playground to collaborate again with the amazing artists Godfrey has worked with over the years; you might think of it as a virtual underground “super band”. On this first single, Godfrey brings together the likes of Billy Ryan (The Bogmen) whose signature guitar riffs provide the song’s undeniably trippy character and the incomparable Mars Williams on sax (of Billy Idol, Psychedelic Furs and Waitresses fame). Robbie “Seahag” Mangano (Sean Lennon and the Grandmothers of Invention) lends his bass chops and rounding out the rhythm section on drums is Joe Russo of “JRAD; Joe Russo’s Almost Dead” renown. Future songs promise to ensnare the talents of other notable musicians from Diamond’s past.

The clip for “Everybody’s High,” which Godfrey Diamond directed himself, begins with an animated image of a spinning record. The sticker in the middle of the disc is printed in glorious good-time colors: pink, sky blue, sun yellow. This, we’re promised, is the tone of the record we’re about to experience — and the clip that accompanies it. From there, we’re shown images of people chasing a natural high. They’re swimming in pools, throwing their hands in the air on the high hills of a roller-coaster, scattering rose petals, and in one memorable segment, literally hanging from a fluffy white cloud. Could this possibly be our future? It just might be. And if it can’t be? – well, it sure doesn’t hurt to have a big dream.