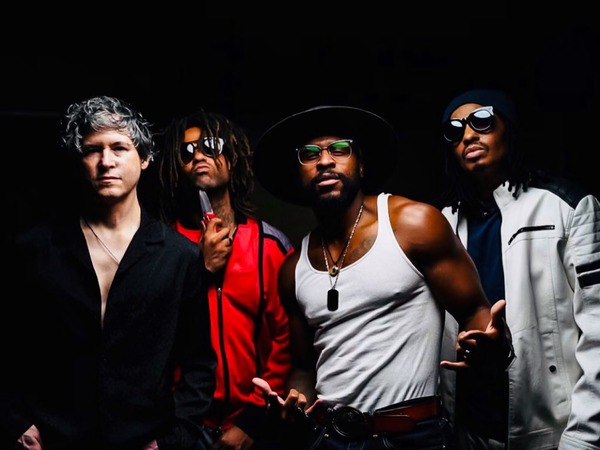 There was magic in the room on February 13, 2021, the first time Baba Jenkins played music together. The quartet had instant chemistry and a natural connection, allowing them to complete and record six songs in only two months as if they had been playing together for years. The band was founded by guitarist Guy Keefer using the online network on BandMix, leading him to drummer Ekko Gaha, then singer Rone Worthen, who brought in bassist Kerwin ‘Skooter” Williams.”Baba” translates to father in multiple world languages, and all four bandmates are dads; “Jenkins” references shared inspiration from the 1950s blues artist Bobo Jenkins. However, their style is not straight blues; they blend blues with rock, soul, country, and whichever other genres make them feel the music the most. Filled with both inspiration and gratitude after writing their first song and true story “Slow Motion”, Baba Jenkins teamed up with Sharing Love With Others, a nonprofit supporting the homeless on Skid Row.From show tickets to merchandise, they donate a portion of all creative proceeds to the cause. With their most recent single, “Wild,” Baba Jenkins continues developing their distinctive musical vibes, giving back to the community, and building anticipation for their debut album, COPPER, coming October 7, 2022.

Immediately, the instrumental sets the soulfully dynamic sound: groovy guitar and bass lines, a steady and driving drum beat, and supporting trumpet and saxophone voices. The lyrics are passionately affectionate and romantic; the song is inspired by Worthen’s love and relationship with his wife, making it especially powerful and moving. His creative sparks were ignited, taking in the natural serenity and chaos of the great outdoors and its native wildlife around a cabin in the mountains. Experiencing and reflecting on these wonders alongside his partner and family, the intimate moments that ensued led to the smooth and striking vocal and lyrical delivery in “Wild.”

Director Katie Pyne did an excellent job creating a visual story for “Wild” in the music video. A couple walks into a rundown nightclub that the male actor purchased with a vision in his mind. His partner is skeptical about seeing what they have to work with upon entry, but as he excitedly guides her to the stage area, the scene comes to life as Baba Jenkins plays “Wild.” As a whole, the band’s stage presence is incredible. They channel every bit of their energy and artistry, performing the live show that lets the couple in focus truly let loose about the newly-acquired space. Baba Jenkins adds a needed splash of color and life to the otherwise dull, black-and-white atmosphere – which is part of why COPPER is the perfect title for their album. Copper is one of the best conduits for electrical energy, and as displayed here, Baba Jenkins’ music and videos are just as electrifying.