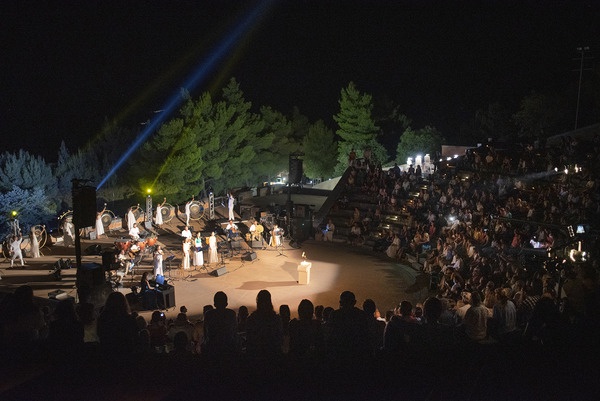 Among the ancient ruins and historical venues in Greece we find the twelve-piece band of PanArmonia performing to an intense crowd. Their music has captured the minds and ears of many as it inspires and elevates in its delivery. They were founded by the pair Apostolos Stamos and Katerina Ritter in 2011. Together they began composing songs that speak about a harmonious and free life. They both share a deep love for music and other musicians gravitated to their vision and PanArmonia became a reality. The members are Joanna Soulkouki (piano/ music composition), Katerina Ritter (vocals), Dimitra Sakellaropoulou (vocals),

There repertoire varies and is based on inspiration or a certain outcome. They play children songs, orchestral music, improvisations, traditional songs, ancient texts and modern Greek poetry set to music as well as many more which they invite others to discover. Only recently they presented the concert “Οrphic Hymns – The Premiere” at the Phrynichos theatre at Delphi, Greece. It was first in a line of concerts that will be performed in Europe and America. The head of PanArmonia Joanna Soulkouki who is the also the pianist and composer of the project offered her vision when it came to preparing the concert series.

“Some years ago, we started studying the Orphic Hymns as well as other philosophical texts that carry their ever-living truths over time. The idea of setting them to music, resulted out of a natural need, to feel the Word and the Virtue through the power of music. The period of the corona virus gave us a great chance to concentrate on this piece of work and through difficulty, to bring about treasures which are hard to find. When we realized how beneficial this piece of work had been on us all, we decided to give a series of concerts, so that more and more people would have the chance to experience what we did, and we still do.”

According to the Jenny and on behalf of the band it is the way the texts had been set to the music according to ancient and modern musical elements to made it unique. The music sets the tone for the meaning of the words. They also become the instruments that create the orchestration that syncs into a harmonious rhythm. Even the gongs which their sound was made according to the planetary frequencies – as those have been measured. The concert that took place at Delphi was very special to her and the band as it left a positive connection between the audience and the spiritual presence that they felt.

They released their first album ‘’With flowers and with light’’ which was well received in Greece and in Europe. So far, since their start they have worked with over twenty different artist who they have inspired to rehearse, co-create and join in their musical, artistic journey. The goal for PanArmonia is to establish that through their music all peoples are and will always be free.