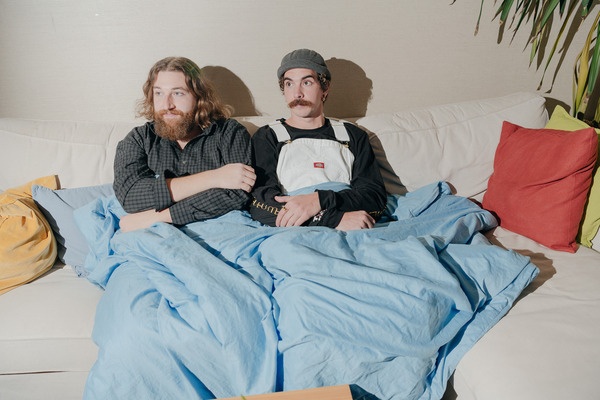 If you really want to know your way around New York, don’t ask a city planner. Save your questions for location scouts – the people who scour every block in every neighborhood for unrecognized architectural majesty, accidental beauty, and sites of visual and conceptual interest. Motion pictures and television shows would be impossible without their daily research and photography, and our understanding of the variety and richness of the American urban landscape would be diminished. The members of Brooklyn rock band Locations are scouts, and they’re proud enough of their labor to name their band after what they do. That’s consistent with the musicians’ values: they fiercely believe in worker’s solidarity, they get LOUD about calling out corruption, and they hold the “radical” belief that healthcare is a human right.

“Moves,” their latest single, is the funkiest and most danceable track they’ve ever recorded: propulsive enough to get a street party started, slinky enough to intrigue, and sexy enough to spark a late-summer flame. But as hedonistic as it sounds, it’s a subtly political song inspired by something serious: a major health crisis suffered by one of the artists in the group. The sidelining and immobilization of a principal member made all the musicians in Locations reflect on the importance of healthcare and reaffirm their commitment to universal coverage. “Moves” doubles as an ode to the joy of motion and a reminder that we’re only truly free when our capacity to continue living is guaranteed. Because of that, they’ve raised their voices on behalf of the New York Health Act, a groundbreaking piece of legislation that would guarantee universal coverage in the Empire State. “Moves” is designed to get the club spinning; it’s also meant to raise consciousness about the Campaign for New York Health, an advocacy group organizing to get the NY Health Act across the finish line.

The members of Locations have added their names to the fight against corruption, and have plans to tackle the climate crisis tee’d up. To them, there’s no point in making noise about nothing. The fact that they continue to bundle these campaigns along with infectious singles demonstrates their shrewdness: they’ll get you moving and thinking at the same time. In short, they’re men of the people – and in the “Moves” video, they let the people talk back. Inspired by CAKE’s classic crowd participation clip for “Short Skirt/Long Jacket,” they travel around Brooklyn with a pair of headphones and prompt passersby to listen to their music and give them a genuine human reaction. Some laugh, some smile, some stop and sing along, some start with a look of confusion before getting into the ferocious groove. But about one thing everybody agrees: Locations has the moves down cold.