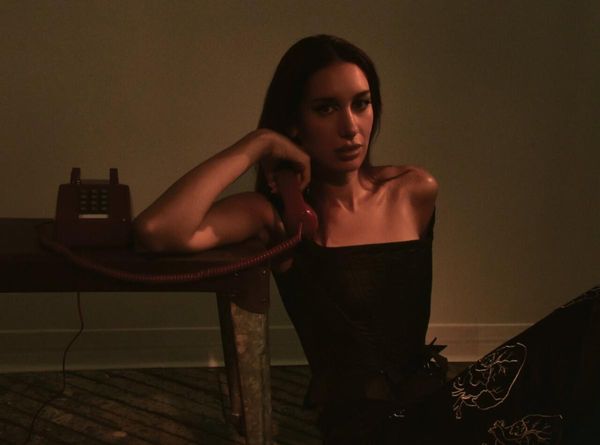 “Spring Seventeen” is a smooth, slow tune that captures the parts of nostalgia that are undesired as certain memories begin to fade and change with time. Lead vocalist Eden Brolin softly sings, “Caught in a brief memory / Like a song you get used to / Loosen the grip of reverie / From distractions I’ve been to / I don’t know you like I used to / Already forgetting you” The track explores the idea that memories begin to take on new shapes and spaces in one’s mind when time creates distance from them.

Of “slow dancin,’” Scout adds, “I wrote this ironically – taking a dig at the games of love. People too often play games. My take is: let’s just cut to the chase. Originally, I had written this as a downtempo country song. During recording, Nick [Kinsey] and I agreed it could evolve to something different. He had the idea to make it ironically fast and pulsing, juxtaposed against the title itself – ‘slow dancin’.’

Today, Izzy Spears announces his forthcoming debut EP entitled Monstar, due November 11 via KRO Records. To celebrate the announcement, he has shared the EP’s first single, “FIST,” alongside an accompanying video. Speaking on the new single, Izzy writes that it is “sealed with a kiss.”

Liz Cass has released the video for her brand new single ‘Near Miss’, the latest song to be taken from her forthcoming debut album The Words out on October 21st via Ultra Records.

The video premiered with Clash who described the song, “A jewel of a single” praising it’s “refined, finessed electronic pop”, which comes in addition to the great further press support the track has received from the likes of Notion, Wonderland and many more.

Blake Rose returns with a brand-new single, ‘Magazine,’ out today via AWAL Recordings. The song debuted earlier today on Triple J in his native Australia. Drenched in nostalgia, and beach-boys-esque harmonies, the up-tempo track tackles the serious subject of addiction.

“Team Sports” gracefully encapsulates the album’s message, as the heavier track concludes with “We’re all just looking for a safe place to spiral / Why not make a team sport out of survival?” It embodies the process of asking for help–from the moment one realizes they need it, to the self-doubt, fear and hesitation, to perhaps the occasional sudden change in appearance, to the value of leaning on friends and getting professional help. There’s a renewed understanding of what it means to ask for help, one that clearly displays the growth of the band both musically and as people in their own lives.

In 2009, BLACK MATH HORSEMAN released their debut album, Wyllt. The band’s music was unlike almost everything that existed at the time. It was hypnotic, heavy, sonic alchemy that seemed to emanate from another time, another place. The members — vocalist/bassist Sera Timms, guitarists Ian Barry and Bryan Tulao, and drummer Sasha Popovic — had somehow tapped into heavy music’s collective subconscious. A European tour, along with appearances at Roadburn and Primavera Sound, solidified BLACK MATH HORSEMAN’s reputation as a mesmerizing live band. Then, just a few years later, they were gone.

Hannover, Germany’s ethereal post-rock/doom duo MIGHT will release their second LP, Abyss, tomorrow through their allies at Exile On Mainstream. Preceding its official unveiling, trusted music portal The Obelisk is hosting an exclusive stream of the entire album.

Gutsaw – Release Lyric Video For “The Flavor of Flesh”

“Kick Back”‘s confident bassline and interweaving melodies underlie Tams’ message that we need to stop trying to convince others that we are worthy of their time.

This song is a reminder to show up and be yourself, trusting in the knowledge that the right person will love the magic you have to offer.

Toronto proggers POLARITY are offering fans a little taster in the form of a new EP entitled “Live Off The Floor at Jukasa Studio”. The EP was recorded in collaboration with JUNO Award-winning producers Darren Magierowski and Jill Zimmermann (Alexis on Fire, Protest The Hero). During the live-off-the-floor recording sessions, the band was filmed by renowned videographer Mike Filsinger (30 Seconds to Mars, Three Days Grace) who captured the intensity and finesse of the band’s performance.

Polarity premiere ‘Circle’ off new EP “Live Off the Floor”

Today Metalcore/Post-Hardcore band If Not For Me release their newest single “Better Days – Reimagined” from their upcoming LP ‘Eulogy Deluxe’.

Canadian psych quartet Mother Sun recently announced a brand new LP entitled Train of Thought, due October 28 via Earth Libraries, as well as the band’s own small label, Kamloops BC-based Divine Bovine Records. Today, they have shared “Orange Colossus,” the second single off the record, in addition to the track’s accompanying music video.

Toronto-based four-piece rock band, A Short Walk To Pluto, dissatisfies social norms with a high-energy track about the inability to be emotionally satisfied in a relationship on the electrifying new single “You Are Not The Only One” — available now!

New York indie-pop darling Julia Wolf has released her deeply vulnerable new track “Virginity” (BMG). While “Virginity” marks Julia’s third song of the year, it is also the first track she has co-produced. It was written when she was 19 and put aside until now. Steeped in relatability and sincerity, “Virginity” aims to offer hope and strength to other young women who have also harbored anger and sadness after their own “first time” experiences.