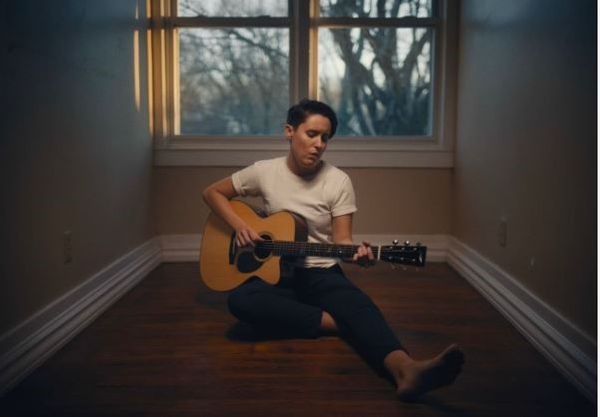 Sean Della Croce begins her video for “Rebecca Henry” in a beautiful blur. She’s present and radiant — we can see the tilt of her head and the movement of her hands, and the balance and poise in her posture, but she isn’t yet in focus. What’s more, the name of the title character is superimposed in white knockout letters over her face. Rebecca Henry dominates the foreground; Della Croce is in the background, gathering herself against a green wall.

But once she begins to sing, everything changes. The image becomes crisp, and deep empathy, longing, and concern are apparent on the folk-pop singer-songwriter’s face. In gentle but trenchant lines, laid carefully before the listener like flagstones on a forest path, Sean Della Croce gives us a portrait of Rebecca Henry. The intensity of her performance and the acuteness of her observation makes her affection palpable. This is indeed a chronicle of budding love, but it’s also a song about the pleasures and dangers of being seen — the thrill of apprehension in detail and color and the pain that comes when the object of your desire can’t return your recognition.

That’s a lot to fit into a three-minute folk song. But Sean Della Croce is a specialist in succinct, descriptive language. She knows how to make every verse a deep repository of meaning: sometimes through crystal-clarity and sometimes through artful ambiguity. Champions of nuanced songwriting have noticed, and Della Croce’s compositions have been praised by critics at American Songwriter, Ear to the Ground, Audiostraddle, and other websites. She’s also earned the respect of her Nashville peers, including the legendary Vince Gill, who called her performances compelling, Hall of Famer Gretchen Peters, who deemed Illuminations, her album, unmissable, and the great storyteller Janis Ian, her forerunner, who dubbed her “one of the best young singer-songwriters I’ve heard.”

There’s something hushed and solitary about Brett Price and Connor Carroll’s beautiful clip for “Rebecca Henry,” but Sean Della Croce isn’t alone in it. There’s another woman here, too: a photographer with an antique camera. She’s here to capture Sean Della Croce’s image, but her attention to her subject feels somewhat less than total. She’s a bit distant, maybe a bit flirty, a bit of a mystery, a riddle on the verge of coalescing into something deeper and more meaningful. If Della Croce does manage to know her photographer better, and if her photographer returns the favor, how will that alter the relationship? We can’t know. But we’re given some delicious hints.