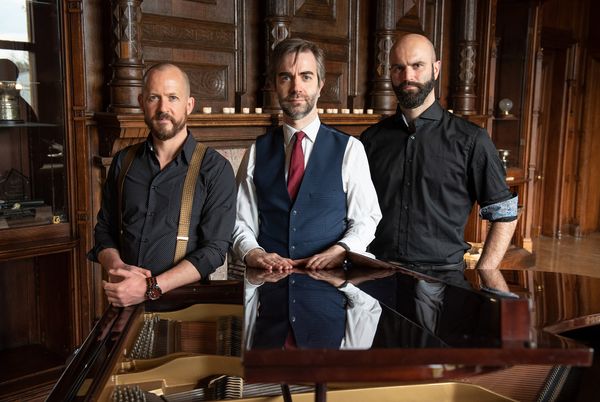 Turquoise are a young band from Brussels, Belgium. They have grown up with nostalgia for an era they did not know: the ’80s. The persistent visions of The Durutti Column and Cocteau Twins have instilled memories among Turquoise’s members, of a blue-tinted VHS nostalgia — a little faded but still romantic, which leads to the name of the group.

Today, Guided By Voices share their second album of 2022, Tremblers And Goggles By Rank, out now via GBV Inc.

Tremblers And Goggles By Rank marks a new phase in Robert Pollard’s songwriting evolution. His songs have always included non-traditional approaches to form and song structure, but with this album, he has pushed it further than ever. While the familiar Guided By Voices pop-craft and melodic virtuosity always occupies center stage, the first-time listener will never be able to predict what’s coming next in a song.

Passing along the assets below in case you’re interested in covering this one for us.

Near Beer Shares “Dead Drummers” Single via Beats Per Minute

Swedish Melodic Metal band MILE proudly release their second single “Dear Mr. Sandman”, which is taken from the upcoming album “A Shattered Mind” due for release via Wormholedeath.

The band, speaking of the single: “Have you ever wished that you lived in a dream? This song is about asking the Sandman for a place where everything is clear and happy but then realizing that it is the real world and your real life that really matters. It is time to break free and live your life.”

“Bloodwitch” is the second single by Project Renegade from the upcoming album “Ultra Terra”, released on June 10th, 2022.

Jazz newcomers, Rich Meehan Trio return with the stunning new single ‘Gymnopedie’. The second single to be taken from the upcoming EP ‘Suite Antique’, ‘Gymnopedie’ follows the trio’s debut release ‘Prelude’ which saw them gain major support from Jazz FM (Dinner Jazz track of the week) as well as support from the likes of Backseat Mafia and BBC Introducing.

Mexico City’s Todd Clouser releases “So Far From God, So Close to the USA” produced by Jesse Harris (Norah Jones)

For his Secret Sun release “Time is a Healer”, Mexico City’s Todd Clouser, called “a fascinating musician” by NPR, returns to his voice as singer/songwriter, offering a collection of 10 pieces that run deep into introspection and new love. “Whole Bunch of Drugs”, featuring indie hero Tōth, recounts the trials of maintaining sobriety while songs like “So Far From God, So Close to the USA” find Clouser reflecting on his adopted Mexico City home. The final track, “On Our Own” sees Todd “waiting out the waves to make you my man”, illuminating what this record was all along – a love story. “Time is a Healer” was produced by Jesse Harris (Norah Jones, Willie Nelson) and recorded in Testa Studio in Leon, Guanajuato, Mexico.

ELIZZA DROPS NEW SUMMER SINGLE ‘DOWN FOR THE RIDE’

In an era of ego fuelled vanity projects Judah The Prince [Krumbsnatcha] delivers an introspective view of life from an artist who recovered from rock bottom. In preparation for the overdue release of Iron Lion of Zion, Judah The Prince releases Saint Judah an album continuing his mission of spreading uplifting, thought provoking Hip-Hop to a world in need of positive energy and healing. Judah The Prince was baptised on Feb 27th this year, this is his testimony…

Two Aussie music legends collide in stirring fashion via Eskimo Joe frontman Kav Temperley’s latest solo outing, with Kav teaming up with Little Birdy’s very own Katy Steele for the charming new single Graduation Day. Releasing today alongside an equally blissful accompanying music video, Graduation Day is a sparkling addition to Kav’s impending new solo album Machines of Love & Grace which is set for release in September. And new music isn’t the only surprise for fans in 2022, with Kav also revealing part one of a huge regional Australian tour kicking off in Exmouth, before hitting Bendigo, Tallarook, Warrnambool, Newcastle, Gosford, Illawarra and Canberra.

Killer Mike has released his first solo music in over ten years with “RUN”; a song and video that reframes American history to include Black history as a part of the nation’s history. The song, which features a verse from Young Thug and an iconic production by NO I.D., arrives paired with a stunning visual, portraying the fight for freedom in a captivating, visceral context, augmented by an intro monologue from Dave Chappelle inspired by the song’s themes. Directed by Adrian Villagomez, “RUN” represents the Just against the tyrannical, Black people and allied people up in arms together rising against the Nazi-esque secessionists that want to take the country back into the confederacy.

Back with a crunchy bass-line and her stunning trademark synths, Alma’s all-new single “Everything Beautiful” is indeed a moment of pure, light-headed bliss, a powerful summer anthem and the ultimate soundtrack for painting the town red: “Everything beautiful dies is my way of saying that I care and I’m here to learn – but I also sometimes just wanna close my eyes and be naive and stupid. Cause that’s life,” says Alma.

Adding to their catalogue of epic anthemic tunes, this latest track is an explosive guitar-pop banger exploring the frustration built from a toxic love. Since first giving fans a taster of the single over on TikTok, the much demanded release of “H8 Me 2” has run up 11M+ views from teaser videos. Fresh, creative and uniquely talented, this powerhouse group continue to build their reputation as the ultimate pop band, matching stunning vocals with undeniably catchy tunes.

The song thrives on a modern, sensuous-driven electronic production that beats with an 80’s heart. There’s a constant sense melancholy seeping into the track – contrasted by Lasse’s intimate baritone voice. It’s amazing!

Coventry is quite the city, isn’t it? An unsung goldmine of the music world, the city has spawned many coveted rappers and musicians alike. From rappers Pa Salieu and JAY1 to the band Easy Life and legacy acts like Y2K star Punjabi MC — the stonework-laden city clearly has lots to offer. That’s where Mugun comes in.

Arriving as a third and final glimpse into their upcoming sophomore album, Wylderness have unleashed a scintillating new shoegaze cut: “Chet Chat”.
Boasting their knack for creating sprawling soundscapes and deeply textured instrumentals, Wylderness’ latest offering arrives as the band gear up to release their long-awaited second album ‘Big Plans For A Blue World’ (out 15th July, via Succulent Recordings).

Today sees the Japan’s multidimensional uprising pop sensation Aisho Nakajima release his new single “DLB”, out now via Avex Entertainment. The hip hop, rap and hyperpop-inspired single is taken from many more of the upcoming songs throughout the year by the rising sensation. Coinciding with Aisho’s 25th birthday, DLB music video is out to be served, too.