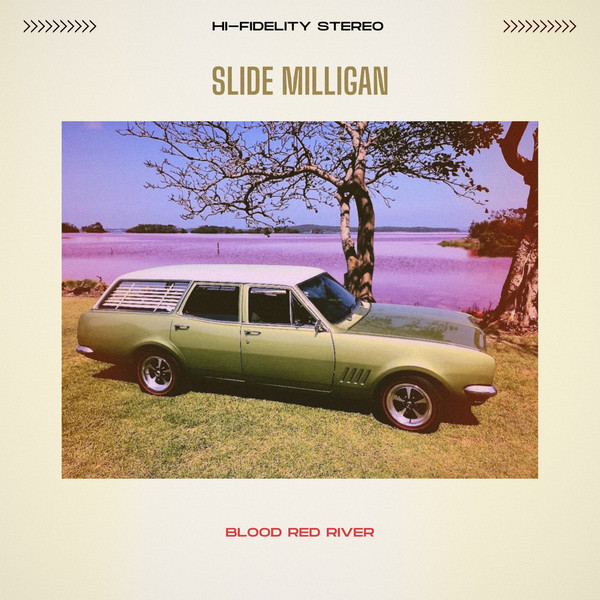 In the gap between country and indie genres, there’s a certain sweet spot. In that sweet spot, sits Slide Milligan. Whilst his musical journey may have been half a life in the making, his music feels like a new wave of country classics. He somehow fuses the fundamentals of country, psychedelia and alt-rock into one tidal wave of sound that washes over you. His latest release ‘Blood Red River’ is the perfect example of his visceral musical style. Perhaps the awesome production that makes this album so exciting wouldn’t have come about if Slide Milligan hadn’t been working on a certain Indie impresario’s DIY projects. Andy Clockwise has transformed Slide Milligan’s sound into a completely consumptive experience; thank goodness those two lit a bonfire and got talking music one night on Clockwise’s farm. Together, these two experienced musicians have created an album swimming in slick sweeping guitars, lusciously moody atmospheres and bold lyricism from that one hangout. What a twist of fate we can all relish in.

‘Blood Red River’ is the album lovechild of country, indie and psychedelia. Each of the twelve tracks on this album is rich in stylings from all three. The track that kicks it off, ‘Comin’ Round,’ is exceptionally atmospheric. The sweeping guitars swim through the speakers and create thick layers of evolving sound. ‘Tomorrow’s Yesterday’ and ‘Deep Blue Sea’ also showcase this gorgeous take on layering. The way that Slide and Andy Clockwise pair up sounds and allow them to bounce off of each other is fascinating. One moment they are in unison, then the next one is drifting off into a current of its own, dancing around its counterpart and then joining up to create a satisfying and completely captivating cadence. Perhaps it’s all in the way that they play with melody. The melodies in this album are often seemingly simple, yet when mirrored and contrasted by the soundscape they are made all wildly colourful. ‘Sharks’ and ‘Gasoline’ encapsulate this perfectly; the hook of ‘Gasoline’ is transformed by the riotous guitars dancing around it. One thing that sews together all the varying atmospheres of the tracks is Slide Milligan’s vocals themselves. He has a powerful presence in each track that grounds each song. His tone is unwaveringly strong as he sails through the sweeping guitars and slapping drums. Not for one second does he get lost in the luscious layers or powerful production of this astounding album. Slide Milligan has sculpted a stunning soundtrack in ‘Blood Red River’, and whilst he pays homage to vintage genres, it feels entirely fresh from start to finish.