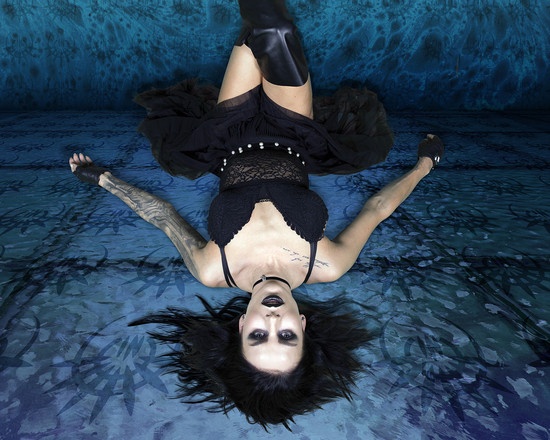 Featuring sun-dappled chords and a soft bassline, “All Night” is a dream of a record that flows through a contemporary pop and R&B space. Crafted perfectly with soulful instrumentation and an exceptional vocal that instantly melts you into the vibe of the track, it is also the coming of Trevis that we are living for.

Lil Kee Brings Life to Memories in “Letter 2 My Brother”

Invisible Oranges is hosting the exclusive premiere of the massive thirteen-minute video for “Chained At The Helm Of Eschaton,” by Austin, Texas progressive death/black metal outfit, HAUNTER. The band’s Discarnate Ails LP sees release next week through Profound Lore Records in conjunction with the start of their European tour.

The upcoming EP features David’s previous fan-favorite release “Lost My Heartbreak,” which has received over 11 million streams to date with over 1 million of those streams within the first week.

The L.A-based house music phenom is linking back up with the Grammy-winning singer-songwriter / producer Little Boots, after their first encounter with one another on “Wasteland” track from last year. “Burn This House” is a fiery tech house groove forged around her silky, shimmering vocal topline, which is carried by disco sirens, slinky drums, and dancefloor-igniting horn stabs.

J. Worra is currently in the midst of a 30-city tour across North America. Meanwhile, Little Boots is set to embark on a trailblazing virtual tour alongside iconic Swedish pop group ABBA.

The View From Here Share Captivating Video and Single for “Nostalgia,” Out Today

New Jersey’s The View From Here bursts into 2022 with their heavy hitting new single and video in tow, “Nostalgia.” Since the inception of the band, they’ve kept true to their roots; writing and performing music that’s fun for them to play, and even more fun for audiences to watch. At their core, The View From Here has steadily had a focus on writing music that was interesting enough for them to go full steam ahead with their musical endeavors.

Today, the pop artist Neoma – the artistic vehicle of Ecuadorian singer-songwriter-producer Carla Huiracocha – has released her new album HYPERREAL, the follow-up (and sequel) to Neoma’s 2019 LP, Real. Now based in Denver, CO, Neoma, originally from Cuenca, Ecuador, Neoma has honed her unique blend of bilingual vocals, sharp pop songwriting, and more experimental electronic flourishes on this new album, which was influenced by the likes of Kate Bush, SOPHIE, ARCA, Donna Summer and SARAMALACARA. Speaking on the upcoming album, Huiracocha writes: “HYPERREAL is the sequel to Real. It is more intense, very hyperpop influenced. The title is inspired by Lorde’s Buzzcut season hyperreal lyric: ‘Make-believe it’s hyperreal.’ Virtual relationships feel very hyper realistic to me. Hyperreal is the dual digital-physical reality of maintaining relationships over the phone. Some things can be real, but not enough.”

Chicago based Rock ‘n Roll band TAFOYA announce their debut EP Freedom (out June 17th) and share the lead single “Shadows”, out April 22nd. Already a big name in Chicago and having performed all over the midwest, the EP marks the group’s first official release since forming in 2021. “Shadows” is a lively and upbeat yet reflective tune that gives a nod to the classic rock sound that Mike Tafoya has been delivering for decades. This song is about memories and relationships – experiences shared with friends and loved ones; but it is also a reflection on ones relationship with themself. TAFOYA are serving a deep, powerful message behind a carefully crafted, powerful Rock ‘n Roll sound.

Call it emotional unavailability, a fear of missing out or just plain old commitment issues, Aileen wrote this song while in London, England, caught up in a misleading, whirlwind romance. She quickly realized a common theme while traveling and pursuing her dreams: listen closely to what people say, but more importantly, watch their actions, because people can tell you exactly what you want to hear, but it’s not necessarily the truth.

PREMIERE: J.S.P. RELEASE NEW VIDEO FOR “ONE IN A MILLION”

“La Luz” is a glowing trap-infused single that wraps itself around the lush bilingual topline borrowed from Colombian creative force Kali Uchis, pulled from her second LP, ‘Sin Miedo.’ The end result is a stunning reimagining that closes out with Softest Hard’s trap-meets-hard dance.

He was recently invited to perform at SLANDER’s Heaven Sent showcase during Miami Music Week, after launching the project on that label with “voices” featuring Pauline Herr, and then returning with follow-up efforts “something I can’t change” and “nowhere left to hide.” Along the way, he was included in DJ Mag’s ’11 emerging artist you need to hear’ last September.

Over a synthwave retro 80s electronic production, the recording starts with a powerful electric guitar solo to create contrast. The vocal line has 4 different melodic sections including a very catchy chorus accentuated thanks to the production work of the producer. The melody is very original and is based on improvisations on the piano. The vocal production includes a choir for strength. The lyrics are inspirational and motivational. The song wants to encourage the listener to enjoy working in an office environment and celebrate work and being employed.

Without even a warning shot, GRIDFAILURE today issues Ghoul Bushcraft: Henchpersons Instrumentals II. In the tradition of the first vocal-free installment – Psychological Badlands, released on Halloween 2019 – its predecessor is another body of Frankensteinian works, collecting scattered live jams, random sessions, unused recordings, accidental toxic runoff, and other mutant or orphaned material spilled forth over the past several years, with material dating back to test trials for the outfit’s first live shows in 2018… and beyond.

Swedish rockers INSAMMER has released a new album called ‘Black Art’. A masterpiece of 11 tracks of total guitar and drums madness, filled with moments of relentless energy throwing back to their punk and rock roots to visionary moments of modern alternative.

Mercvrial’s debut LP “Brief Algorithms” is the sophomore EP for the band. “Brief Algorithms” represent a modest stylistic departure for Mercvrial, as they wanted the new release to be ‘hustle more’ and be a ‘bit heavier in spots.’ Mission accomplished. With their new sound Mercvrial delivers a brisk, energetic mix of indie rock, punk and shoe gaze that gives off ultra-cool-lo-fi vibes.

The writing process for ‘vancouver’ began in a barn in Brownwood, Texas. This was months prior to the formation of the group and was the first song they wrote together.

Michigan deathcore outlet And Hell Followed With are proudly introducing their third studio album ‘Quietus’, out worldwide on various music streaming platforms via Hollowed Records / Kontrolla Music Group. The band claims that the new record is “a homage to the past and a look to the future”, as they’ve revisited their second record ‘Proprioception’ for it as well. Dive in and experience ‘Quietus’ in its entirety today.

With their music almost reaching one million streams on Spotify, as well as placements on editorial Spotify playlists such as Folk & Friends, the duo are set for an exciting 2022.