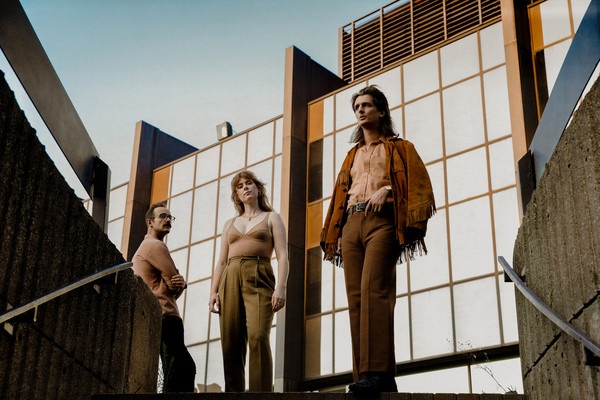 Tuvaband is the wildly eclectic brainchild of fearless songwriter, producer, multi-instrumentalist, and producer Tuva Hellum Marschhäuser. Tuva previously earned a Norwegian Grammy nomination. Tuvaband have received support from the likes of The Line of Best Fit, Wonderland, Gigwise, Dork and Atwood Magazine to name a few.

After completely selling out his first two solo headline shows in Berlin within 72 hours, fast-rising bedroom producer DONKEY KID is pleased to reveal the animated video for his new single ‘Necklace’ is out now on all good digital service providers.

The video was made by close friend, 20-year old Bruno Giannori, also born and raised in Berlin, who studies at the art school in Berlin Weißensee, and is a rising talent in his field.

Taken from their upcoming EP of the same name, the group’s newest effort heralds the next stage in their thrilling development, acting as bridge between the charged indie rock of debut LP ‘Cheaply Bought, Expensively Sold’, and their as yet untitled second record, slated to arrive in 2023.

German progressive heavy rock band, SONS OF SOUNDS, have released a music video for ‘Let It Go’, the song is takentaken from their album ‘Soundphonia’, wich was released via El Puerto Records. The video was recorded along the European Tour with Geoff Tate (Queensryche) in March 2022. View the YouTube video here:

Reminder: Karl Wolf’s new single “No Privacy” is out

Our phones have become an extension of who we are. We’re addicted and as a consequence of tech we are losing our privacy. Our digital identity is not the chip implanted as many theorized would/could happen.. they’re already tracking us. This song is an adaptation of Rockwell’s 1984 classic “Somebody’s Watching Me”, seems like it was a window into our present as many today feel that their freedoms are being compromised. The decentralized world and the “Metaverse” are signs of this inevitability.

Originally the front man of the band Bad Fathers, Austin has been working more on hip-hop and EDM music and video solo projects. Austin had this to say this about working with Young Buc on the single: “In finding some overlap in song subject matter with Young Buck, dope happened to be one area we both had some relation to.”

Country Trio Flat River Band has released a video featuring The McCrary Sisters, in support of their new radio single, “Shining Through My Window,” which charted in top three of the PlayMPE Christian Top 20 Streaming Chart on April 10. The trio of brothers, Chad, Andy and Dennijo Sitze, have a wealth of musical talent and experience, having played and toured with their family’s band since they were very young. “Shining Through My Window,” penned by Chad Sitze, has a cheerful theme, laden with the band’s stunning harmonies. The video, directed by Mark Nicolosi is available on YouTube:

Baltimore progressive tech-death metal quintet GREYLOTUS have unveiled the first single from their new album! The band has partnered with Metal Injection to premiere the music video for “Azure Rain”, which can be seen here.

Arichussettes and Dollaz Da Barba return with a new visual Do-Or-Die off their latest album That Gaas (Godz And Apes Society) that tells the savage tale of dealing with fake guys. “We wanted to make a video that was more like a movie so we chose to have a theme where we actually kidnapped a fake dude trying to step in the hood” says Dollaz. “Sometimes people try to portray themselves to be something they’re not and get caught up in the process” says Arichussettes. Check it out now on YouTube and your preferred digital streaming provider.

BENNY BIZZIE takes us on an epic adventure of desire in this punchy, falsetto-infused, trail of escapism and wonder with his latest single, ‘Forever’, out now on all music digital platforms.

Featuring a hard-hitting drum pattern and melodic nuances produced by heavyweight Cee Figz – who has also produced for the likes of Wretch 32, Fredo, and Popcaan – ‘Forever’ is an emotive adventure worth exploring, as it seems the British-Nigerian R&B singer and songwriter is at a transformative stage of his artistry and we are in for a taste of evolution…

The Hamilton, Ontario-based trio, Ellevator are today sharing their new single, “Party Trick” which arrives as the final advance track to be lifted from their forthcoming Chris Walla-produced debut album, The Words You Spoke Still Move Me – out May 6 via Arts & Crafts. The new single arrives following earlier tips from NPR, Consequence, The Needle Drop, Exclaim, FLOOD, The Line of Best Fit, Under the Radar, CBC and more. The band, who have just wrapped up a run of US dates including a stint at SXSW will support the release of the new record with Canadian dates this May with support coming from Pleasure Craft (Toronto) and Deanna Petcoff (London, Hamilton).

‘Hard Mode’ is about the feeling of thinking you’re never good enough, Aridonis explains further “we’ve all suffered through that you’re never good enough, all the internalized capitalism, rampant consumerism, and every other gross “ism” we’ve become accustomed to, has left us feeling inadequate, incomplete, and burned out. So sometimes we need to just hold on for a second, and remember who we are.”

SICKSEED are ready with their second single ‘Book of the Dead’

Five-piece metal band SICKSEED, are gearing up for the release of their debut LP ‘Goregeous’ – a ten track horror movie tribute album, that will bring the listeners into a dark and gloomy place. Today they present their second single ‘Book of the Dead’ which features Sofia Schmidt of Ethereal Kingdoms – watch the accompanying music video:

Written by Matt Zane, “I Never Saw You” is off of the band’s final album with the late bassist DV “Dirt” Karloff “Black Level Six” (out now).

Finnish death doom masters, SWALLOW THE SUN release their new music video for “This House Has No Home”, from their recent full-length album Moonflowers. Watch the video, which was filmed, directed and edited by Vesa Ranta & Petri Marttinen from Kaira Films, HERE.