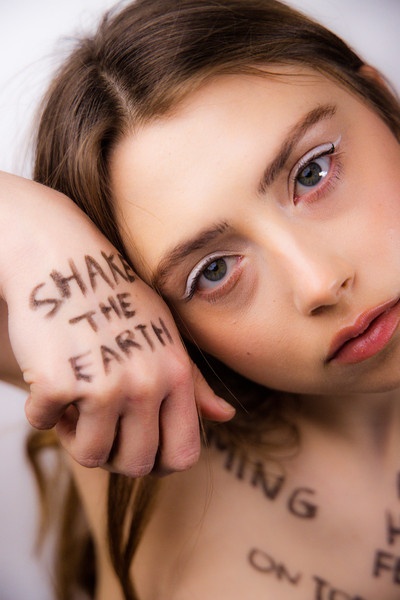 Something magical happens to a musical artist who scores a film. Never again does she compose music in the same way she once did. Her storytelling impulses are focused. Her talent at illustration is enhanced. Her sense of drama is heightened.

Baker Grace was already a terrific descriptive songwriter before she made her significant contributions to the soundtrack to the post-apocalyptic movie Last Survivors (2021). But after scoring the Alicia Silverstone-Stephen Moyer thriller, she’s found an entirely new gear. The Weehawken, New Jersey pop singer and songwriter has become a master of mood and an inerrant weaver of gorgeous melody. “Lullaby,” her single from the soundtrack, encapsulated and enhanced all of the movie’s themes: the perils and pleasures of isolation, the romance of danger, the seductive quality of ignorance, and the healing power of the brutal truth.

She’s carried everything she’s learned into “Shake The Earth,” her latest single — and the most fully realized recording she’s ever done. From the first chord to the last lingering echo, “Shake The Earth” casts a spell. This isn’t just a three-minute pop song. It’s a short story with an attention-grabbing beginning, a thunderous (and string-drenched!) conclusion, and an unforgettable emotional trajectory. Hours in the film editing suite have taught Baker Grace how to underscore each lyric with descriptive sound and make a song’s meaning manifest through smart arrangement and production. “Shake The Earth” is already a thoughtful song, but Baker Grace’s scoring skills have given the recording a rare depth. Of course, it helps that she gets better and better as a singer, capable of communicating empathy and scorn, fear and excitement, vulnerability and toughness, all in the same gorgeous, resonant phrases. Her instrumental skills have kept pace with her vocals, too, and she’s grown into a pianist of great subtlety and expressive nuance.

The “Shake The Earth” clip also suggests that Baker Grace doesn’t have to stop at scoring films: she could star in them, too. Her past videos have already demonstrated her comfort in front of the camera. In “Shake The Earth,” she proves she knows how to move, too. Baker Grace plays piano on the floor of a sun-drenched warehouse — but she also dances across the floor with a willing partner. The choreography tells the tale of a vexed relationship characterized by passion, mutual miscommunication, reconciliation, and heartbreak. Like the song, it packs a staggering amount of meaning into three and a half minutes of storytelling. The trick is to make every gesture signify.