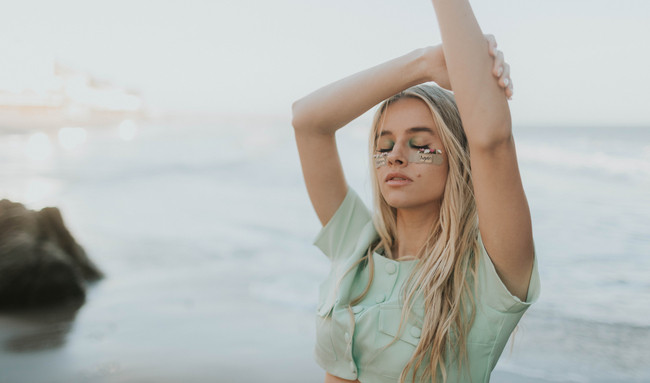 The introspective track sees Jaz in life-affirming mode speaking for young people like him that are battling through demons, just trying to make it and rebuild their lives. Creatively, Jaz fuses elements of melodic rap, R&B and indie pop to excellent effect.

CITIES OF MARS: reach new galaxies with “A Dawn Of No Light”

Swedish doom cosmonauts CITIES OF MARS team up with Metal Injection to present the second single taken from their new album ‘Cities of Mars’, due out May 20th on Ripple Music. Get into the heaviest space opera ever with their new track “A Dawn Of No Light (Chthon)”!

Swedish goth rock/metal band Outshine will be presenting their fifth full-length “The Awakening” this coming May 2022 via Rockshots Records. The album follows their four previous LPs since forming in 2007. With a vision of darkness and melancholy in a visual landscape, their forthcoming album is all about what has happened in the world during pandemic times.

Little Boy fragile and poetic song about breaking free of the heavy chains of lost love. Releasing yourself from the sedated state of delusion. The composition reflects this state of mind; sometimes on the verge of collapse, returning with intention and hope, shuffling drums, hazy vocals, distorted guitars, and lyrics like a mantra for release.

About to embark on an extensive UK and European tour in support of last year’s acclaimed album Endless Arcade, Teenage Fanclub share a characteristically gorgeous new song today titled “I Left A Light On”. With its yearning melody and uplifting lyrics about finding hope in dark times, “I Left A Light On” is vintage Teenage Fanclub and comes accompanied by a video shot by Ryan Eddleston in Rockfield Studios where the song was recorded.

Roscoe Roscoe met at The Brit School (following in the footsteps of Black Midi, who also formed there) and came together through a shared love of 60s counterculture and psychedelia. Rather than sheerly revivalist, however, their music comes from being part of a generation who have been able to take non-specific and widely drawn sources via the infinite bank of the internet. Other influences the band have cited include avant-pop groups Stereolab and Broadcast, along with evident echoes of Wand, Tame Impala, and Crumb in their music as well.

EVOLUTION EMPIRE has released the official music video for their single “Under the Gun.” The band is currently on tour supporting the “BROTHERS IN ARMS TOUR” w/ ILL NIÑO, DROWNING POOL and HED PE.

Martha Elisa is the new face of Christian R&B music and is best known for her ability to capture the inner struggles of Christian living through her song writing. Her latest single, “I’m Not Perfect” addresses the challenges of sin and self-condemnation. Martha states, “I write about real life issues as a believer in Christ! I want to minister to those who are broken and in need of hope. I want them to know I struggle too! We are all a work in progress!” However, Martha also offers listeners encouragement through her music to help build their faith, remind them that they are not alone, and that with God, ALL things are possible.

Cultus Black is a dramatic death core/ nu-metal crossover featuring members of other national acts masked to protect their identity. “Killing The Beautiful” is the second release off of their debut album produced by multi time Gold record recording artist James Wisner (Underoath). This track is both heavy and melodic, being sited by those close to the band, as their favorite of all the bands offerings. With the stunning visuals video producer Jaiden Frost brought to the table, this single and accompanying music video will be one to remember.

“Different From What Was Missing” is a song taken from ATHEMON’s self-titled album “Athemon” out via Wormholedeath / Aural Music Group worldwide.

T-Shyne returns with a star-studded effort where he displays his distinctive, unique style. Dripped in heavy-hitting, potent production from the likes of Supah Mario, Marzi, Wheezy, Confetti Nights soars with T-Shyne’s sonically rich hooks, sneakily infectious charisma as the world receives a more in-depth sense of his story. Hailing from New York, by way of Grenada, T-Shyne has been coined as a promising artist from Young Thug’s Young Stoner Life Records for his vivid lyrical caliber and his undeniable ability to stand out on any track he’s up against—regardless of any other players he is placed with. Confetti Nights exemplifies these sentiments to a magnitude as listeners receive a masterful project that attests T-Shyne is a star whenever he is placed on the court.

“In my life I have left (metaphorical) claw marks on everything and everyone I have ever loved,” states the LA-based pop artist and model. “No one tells you how hard it is to let go, and it is something that can only be learned through experience. If you are someone who struggles with letting go I hope this song gives you permission to release what is hurting you.”

Everclear, one of the leading alternative rock bands to emerge from the ‘90s, is celebrating 30 years as a band in 2022 and to mark this major milestone, the quartet — led by vocalist, guitarist and founder Art Alexakis — has announced a 25+ date North American 30th Anniversary Tour featuring special guests Fastball and The Nixons. The setlist for this year’s tour dates will run the gamut of Everclear’s career including songs from their currently out-of-print full-length debut, 1993’s World of Noise, which the band has announced will be remastered and made available for the first time on all digital music streaming platforms on Friday, June 10th.

SYLVAINE comments on the collaboration: “Working with Carpenter Brut was a very inspiring collaborative experience, allowing me to explore some musical territories I hadn’t been much within before. Having a lot of creative freedom on the track, I decided to work with the duality between very legato, almost ghostly sounding vocal lines, along with more rhythmic, strict background vocals towards the end. I had so much fun working on this track, both lyrically and vocally speaking, and feel very grateful to have been part of such a killer project, alongside so many incredible musicians. Do yourself a favour and give this record a spin”