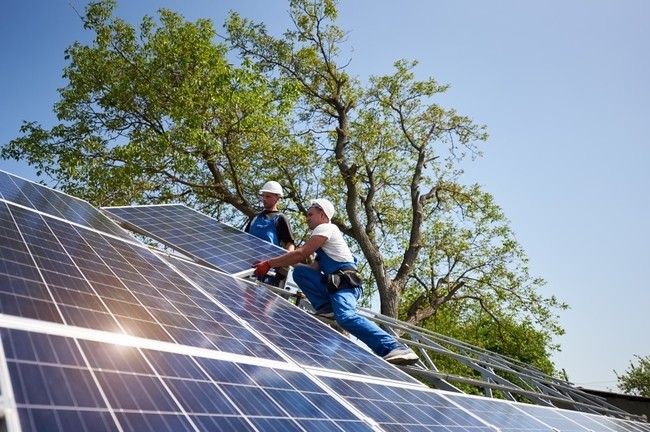 You probably know that solar panels on your roof can provide enough energy to power everything in your home. But, how solar panels work could be something of a mystery. Let’s take a look at how energy from the sun is transformed into usable electricity.

The Magic Begins With Solar Cells

Solar cells are made from crystalline silicon, a nonmetallic element found in nature. In fact, much of the Earth’s crust is composed of silicon. As photons from sunlight hit the layers of silicon within the cell, their energy goes into the silicon layers as electrons. Thus, when exposed to sunlight, silicon solar cells create a DC electric current. This current can be used as-is if you have DC lighting and appliances, or turned into an AC current through an inverter.

Solar panels are made by connecting a series of solar cells with wire and pressing them between sturdy panels of non-reflective glass. The glass assembly is then placed in an aluminum frame. The glass is nearly fracture-proof and can withstand most hail storms and other inclement weather. A newer type of solar panel is thin film; these are stiff, yet flexible, and look like a piece of black plastic. Compared to monocrystalline or polycrystalline solar panels, thin-film panels are not as efficient. But, they do have several uses, such as on curved surfaces.

The number of solar cells contained in a solar panel determines the wattage. Typically, consumer-grade solar panels come in sizes of 100 watts to 200 watts. The panels can be wired together to create any size bank.

Solar Panels on Your Roof

Your solar installer can help you to determine your energy usage, and from there, determine the number of solar panels that you’ll need. The panels will be wired together, and the power will either be fed into a battery bank or back into the municipal power grid. If you’re concerned about being without power in a grid-down situation, then a solar system with a battery bank and Dcbel technology is what you want. However, if you want lower electric bills, along with tax breaks and rebates, a grid-tied solar system might be what you want.

Solar panels seem to work like magic, but the energy is very real. The good news is, you don’t need to fully understand how solar panels work to reap the benefits.