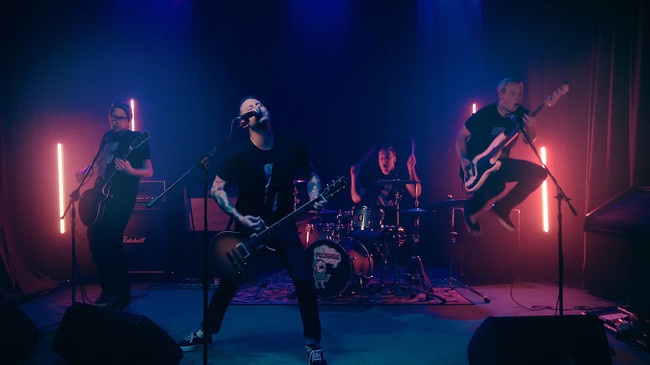 At a really great pop-punk gig, time speeds up. Everything races: the music, the dancing, the flashing lights, the heart rates of the musicians and the people in the crowd. And it isn’t because of the tempos, necessarily, or the flashiness of the performances. It’s because pop-punk captures urgency better than any style ever has. It’s the rush of the untethered mind, the thrill of the held breath and the wild step into the future, the glorious impatience of youth, the insatiable demands of the current moment. The Fizzgigs have that down pat, and the video for “Destiny” is a visual manifestation of the velocity of pop-punk and power-pop at its best. The clip is caffeinated, dedicated, and wonderfully accelerated, as all four members of the group charge around the stage at a superhuman pace, taking the music higher and higher, pushing faster and faster, burning brighter and brighter.

That’s exactly what you’d expect from a group named after the excitable, benevolent monster from the fantasy classic The Dark Crystal. The Fizzgig was adorable — but ferocious, too. Weeeeeeeeeeeee Are The Fizzgigs, the group’s debut full-length, is a friendly handshake with a joy buzzer, a bottle rocket blasted off from a soda pop can, a cannonball into the swimming pool on a steaming hot summer day. “Destiny” has everything you’d want from a power-pop song: monster melodic hooks, clever lyrics, crunchy overdriven guitar, pounding drums, and plenty of attitude. And after two succinct minutes, it’s over.

This is the sound and approach that has made the group the talk of the Calgary, Alberta rock underground, and it’s landed them on bills with A Wilhelm Scream, Teenage Bottlerocket, Mad Caddies, 88 Fingers Louie, and other like-minded bands. It’s all on view in the pleasantly buzzed “Destiny” video, which channels the Fizzgigs live experience better than a straightforward performance clip ever could. Directors Patryk Terelak and Rockwell White have manipulated the frames to make it appear that the musicians are strumming and singing with preternatural quickness — only they’ve somehow managed to do it in a way that makes all the words, beats, and vigorous downstrokes line up with the recording. Chalk it up to power-pop magic. The group’s cheekiness is on display in the clip, too: they wear matching shirts with the letters F I Z, and Z on them, simultaneously letting you know who they are and assuring you that they don’t take themselves too seriously.