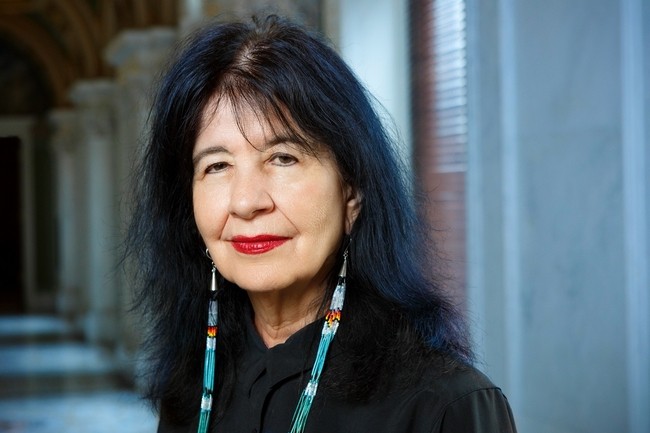 United States Poet Laureate Joy Harjo has been named the first Artist-In-Residence at the Bob Dylan Center (BDC), in advance of its much-anticipated grand opening on May 10.  Throughout the course of her six-year appointment, the Tulsa native and member of the Muscogee Nation will present educational programs and live performances, as well as curate special exhibitions, at the BDC.

According to Steve Higgins, Managing Director of the American Song Archives which oversees the BDC, Harjo’s tenure as Artist-In-Residence is integral to furthering the Center’s mission.  “As a poet, musician, playwright and author, Joy Harjo exemplifies artistry and brings light to the world through her work,” Higgins said.  “The BDC’s programs and exhibits will explore the creative process and inspire the next generations of artists, and we couldn’t be more honored that Joy is playing such an important role in helping us to fulfill our mission and establish our future legacy.”

In response to her appointment, Harjo said, “When Bob Dylan stepped forward and made his path of song making, poetry, and storytelling, a path that lit a generation, he opened a creative door for others to find their way to fresh invention and imagining. I am one of those who followed. My residency will allow this legacy to be extended to the community, to encourage and share creativity. I am honored to be part of this new venture.”

Appointed in 2020 to a rare third term as 23rd Poet Laureate of the United States, Joy Harjo is an internationally renowned performer and writer of the Muscogee Nation. She is the author of nine books of poetry, several plays and children’s books, and two memoirs. Her honors include the Ruth Lily Prize for Lifetime Achievement from the Poetry Foundation, the Academy of American Poets Wallace Stevens Award, two National Endowment for the Arts fellowships, and a Guggenheim Fellowship. Harjo has produced seven award-winning music albums. She is a chancellor of the Academy of American Poets and chair of the Native Arts & Cultures Foundation. Her signature project as U.S. Poet Laureate, “Living Nations, Living Words,” features an interactive story map developed in conjunction with the Library of Congress that maps 47 contemporary Native American poets across the country and connects to an online audio collection developed by Harjo and housed in the Library’s American Folklife Center.

About the Bob Dylan Center®

To be anchored by a permanent exhibit on the life and work of Bob Dylan, the Bob Dylan Center is committed to exploring the myriad forms of creativity that enrich the world around us. When it opens in the Tulsa Arts District in May 2022, the center will serve to educate, motivate and inspire visitors to engage their own capacity as creators. Through exhibits, public programs, performances, lectures, and publications, the center aims to foster a conversation about the role of creativity in our lives.

As the primary public venue for the Bob Dylan Archive® collection, the center will curate and exhibit a priceless collection of more than 100,000 items spanning Dylan’s career, including handwritten manuscripts, notebooks, and correspondence; films, videos, photographs, and artwork; memorabilia and ephemera; personal documents and effects; unreleased studio and concert recordings; musical instruments, and many other elements. More information at bobdylancenter.com.