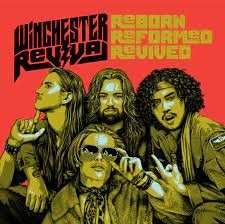 It starts with a mere growl, and before we know it, a groove urgently warning us of the apocalypse has picked up the track and made everything sound all the faster. Winchester Revival’s new single “Reborn, Reformed, Revived” is a beastly, unrelenting exhibition of strength and songcraft, and while it’s true that its cornerstones are red-hot melodies and a guttural guitar kick that has been increasingly difficult to find on the mainstream end of the rock spectrum over the past few years, this is why so many people are getting behind this group right now. Blasting us with as much metallic grime as they can fit into a single without overmixing the distortion, Winchester Revival makes it known who they are here – and what they’re going to do with their fame.

These lyrics are a lot deeper than I had initially expected they would be, which isn’t to say that this band didn’t have a good poetic angle before releasing “Reborn, Reformed, Revived.” If anything, I think that the growth they’re showing off in this piece is more indicative of how exponentially they’ve evolved as a unit and how well-suited to the rock n’ roll lifestyle they’ve adopted. They sound, look, and feel the part that they’re being made to play in this track, and I doubt that you’re going to find a critic – friend or foe of this band exclusively – who will tell you anything different. Winchester Revival is the narrative here, which isn’t the case with any other banner singles I’ve listened to in December.

Instrumentally, while the band isn’t really showing us anything about their style that we didn’t already know, they’re cutting away the very notion of fat before we have the opportunity to look for any in “Reborn, Reformed, Revived.” Between the lyrics and the percussion, there’s nothing other than a well-arranged bassline tying everything together – the guitar and the vocal parts are on a level independent from the rhythm section and even the verses that the latter is responsible for breathing life into. There might be a lot of bands who are trying to make music similar to what Winchester Revival is producing out of Australia right now, but I personally haven’t heard a single one that’s able to keep up with their energetic spirit.

In the chorus of “Reborn, Reformed, Revived,” everything comes undone in the sexiest, most rebellious manner possible, and though this predictable breakdown puts their formula in line with some of the greatest to ever pick up instruments in rock n’ roll, it doesn’t feel like it’s been recycled in any way. Winchester Revival is a band that, while having a lot in common with the old guard in this genre, very much lives in the here and now, creating much-needed riffing for a generation that doesn’t know how to respond to heavy music of this organic variety. They’re crushing their competition, and it’s easy to see why when you look at a piece as good as this one.