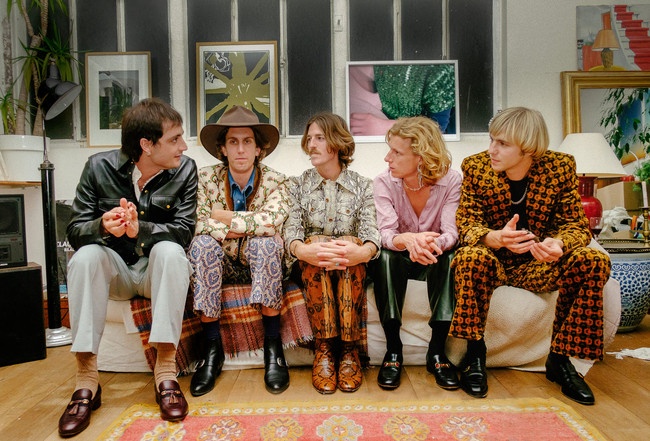 It turns out that the most intriguing serial drama on the internet has the best music, too. The run of interrelated videos for songs from Day/Night, the acclaimed second album by Parcels, have left fans puzzled, intoxicated, disoriented, mesmerized, and, above all, ready for the next installment. Director Carmen Crommelin (sibling of Parcels guitarist and singer Jules Crommelin) has fitted the Day/Night songs to an artfully fractured storyline involving a house party, a psychiatrist, a frustrated host, a dancer, and lots of gorgeous, angled shots of the city at night. Voyeurism, sexual ambiguity, romance, questions of privacy, the things we tell and the things we keep to ourselves — it’s all explored in these ridiculously potent, endlessly rewatchable three-minute clips.

A video miniseries with sophisticated themes and spiked with images that speak directly to the unconscious? It’s nothing out of the ordinary for Parcels, who’ve proven, again and again, that they’re the most ambitious dance-rock band around. Day/Night is an old-fashioned double album, but it’s so propulsive and loaded with interesting musical ideas that it flies by in a flutter of heartbeats. The Berlin-based quintet may have left their original home base of Brisbane, Australia, but they still impart some seaside sunshine to everything they record. Day/Night incorporates elements of classic sophisti-pop, late-night psychedelia, Beach Boys-style harmonies, Bee Gees-style beats, and electronic experimentation into their sound. It’s all dazzling, and it’s all danceable, and some of it even throws back, enthusiastically, to the glory days of disco.

“Famous” is a song like that. Though this is an impeccably modern production, it could have set the floor aflame at Studio 54. A track like this one requires dancing in its video, and Carmen Crommelin has found herself an exceptional subject to choreograph: Parcels drummer Anatole “Toto” Serret, who turns his small apartment into a stage for his movement. He’s not alone, though — he dances for the delight of his small child, who joins him for a few steps. Unbeknownst to him, he’s getting photographed from across an alley by another character, played by Parcels synthesizer player Louis Swain. What is his obsessive interest in his neighbor? Does he want to make Toto famous, or does he want to keep him all to himself? Then there’s the party that the other band members are at, visible in a high window across the alley, and that psychiatrist, who seems to be Toto’s wife, but who doesn’t have much enthusiasm for his dancing. We desperately want to know what she’s up to. Crommelin teases and winks but provides no closure. For that, we’ll just have to wait for the next video — or perhaps the next, or the next, or the next after that.