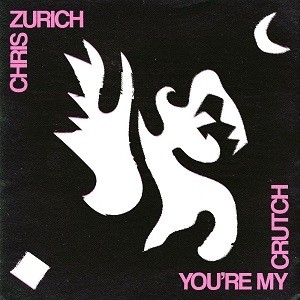 Chris Zurich’s new single “You’re My Crutch” is the latest release from a young singer/songwriter with a growing discography. This New York City artist plied his trade for some time on the Big Apple’s subway platforms and this constituted a baptism by fire few traditional venues can hope to match. His previous releases illustrated a potent blending of songwriting fundamentals with recognizable yet idiosyncratic melodic virtues, but “You’re My Crutch” pulls off reaffirming those values while expanding his artistic purview.

Pulling it off in a deceptively ambitious track like this is impressive as well. It’s a quiet song, almost meditative. Zurich builds it from a near-hushed and stripped back musical landscape into an orchestral pop gem in miniature. It has light touches of guitar adding ghostly lines over the top of a non-traditional percussive track. Some listeners will yearn for drums a little harder than this, but Zurich is following the sound he hears in his head. Even a single listen to “You’re My Crutch” shows a songwriter who lavishes care on his material and it pays off for listeners.

The vocal arrangement is stellar. His command of dynamics is on display as Zurich escalates the singing from an emotional beginning, his voice practically quivering with emotion, into a mini-symphony of voices by song’s end. None of it seems overwrought. This isn’t a lengthy track and Zurich paces it in such a way that no individual part ever overstays its welcome. It’s thoroughly entertaining and moving from the outset.

His voice has classic pop attributes while still remaining expressive. There’s none of the shallow syrupy goo we hear from less artful performers. Much of this is due to the lyrics; Zurich has written a simple but never easy song treading on a subject few songwriters tackle despite its obvious potential. It’s about a damaged yet loving soul’s journey learning to trust again without any of the tired tropes and cliches so often burdening songs like this. His voice sweetens the track, brings home its emotional realities in a much more powerful way, and is its unquestioned center.

I get the feeling, after hearing this song, that Zurich has barely scratched the surface of his considerable talents. “You’re My Crutch” is a striking advance over previous tracks and I’d expect that its successors will be similar leaps forward for him. His music is honest, introspective without ever sounding distant, personal without ever falling into obscurity.

It’s with performers like this that you can feel rest assured popular music’s future is in good hands. He’s committed to more than creating more disposable fare for the masses; “You’re My Crutch” is a song designed to live far past its release dates. This is the sort of song you can have an ongoing dialogue with and get something out of the listening experience each time you return to the track. Chris Zurich has come up the hard way as a musician, he’s no oversight sensation, and the hard work is bringing in enormous dividends.