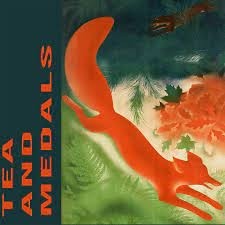 The Insufferable Paul Scott? Hardly. Insufferable Nickelback, for sure, as well as – of course – severely insufferable Milli Vanilli. Paul Scott, however, knows how to create catchy, enjoyable pop-rock. He doesn’t bludgeon us, the way Nickelback does, nor try and fake it, as we all know Milli Vanilli got caught doing. Tea and Medals is a collection of earworms that cause absolutely no suffering to anyone.

Not sure why, but “Stealing Honey” may be this album’s best track among many winners. Scott sings about “stealing honey from a hive” on it. Just in case you thought this was only a Winnie the Pooh criminal activity. The track transforms this bad behavior into a gently rocking, melodic gem. Another one, titled “1000 Saints,” features an upbeat, melodic groove, which sounds a little like a Christmas song. Then again, Christmas is a holiday that does feature one well known, particularly rotund saint — Claus of something. Speaking of Christmas, the mostly acoustic “Pinned” refers to “that kid in the Nativity.” Yes, this is indeed one of the strangest references to Christ in a song. It’s also a relatively sad little number. Scott is not usually quite so pessimistic. Nevertheless, this is about as dark as Tea and Meals gets.

The album opens with Scott counting off, “1,2,3,4” on a track named “Bells Ring.” One might have expected to hear glockenspiel (or at least fake glockenspiel) on this number. Instead, it’s a quiet, low-key piece with a vocal like that of Damon (Blur) Albarn. Oh, okay, there are some bells on it toward the track’s end. Still, it’s no bell ringer, and intentionally this way.

Some of the album’s best group vocals appear at the intro to “Electioneers,” which gives the song a nice, Beach Boys touch. Its lyric, however, is not at all Beach Boys-like. Instead, it’s a non-partisan lyrical shot at politicians. Yes, they may go around making promises and kissing babies, but they are – far too often – wolves in sheep’s clothing. The song is so sweetly melodic, though, it’s sometimes difficult to believe Scott is singing about such a nasty little subject.

The album closes with the acoustic guitar and piano led “Circle The Oval.” Might this be Scott’s way of saying ‘circling the drain’? It may just be, because it brings out Scott’s melancholy voice once again. At 4:50, this is also the album’s longest song.

This finale is preceded by “Billions,” which sounds like a sarcastic cry for super wealth. We all know, though, that The Insufferable Paul Scott will never make billions, let alone millions, creating quant little songs like the dozen contained on this sweet album. He will, however, make many listeners quite happy with his joyously memorable pop music gems. There are plenty of annoying billionaires in the world. We really don’t need any more. What we desperately need, though, is music that feels good the first time we hear it, which happens again and again with this album. In a perfect world, The Insufferable Paul Scott would be wealthier than Wall Street. You may buy this album and hope it puts him in an upper tier tax bracket. It won’t. Nevertheless, this will be money well spent.